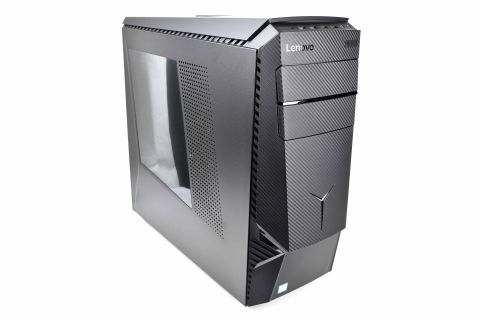 The Lenovo IdeaCentre Y900 Razer Edition won’t likely be around for too much longer, with its aging Intel Core i7-6700K processor seeing its lifecycle coming to an end and 8th generation Coffee Lake CPUs already within sight. However, the idea of a Core i7 and GTX 1080-equipped gaming that comes with a mechanical keyboard and gaming mouse from a popular peripheral manufacturer is attractive to most average consumers, and at its reduced price of $1,700, we wouldn’t fault anyone for taking Lenovo up on it. There may be a few performance hang ups, and although it trails other similarly-equipped systems when (for all intents and purposes) it shouldn’t, it still performs in the same ballpark, and sometimes, that’s enough if the price is right.

The Lenovo IdeaCentre Y900 Razer Edition desktop gaming PC we're reviewing today uses an Intel Core i7-6700K. We do have several gaming PCs with more updated processors on the test bench, and we'll be finishing those reviews and publishing them during the rest of this summer, and we'll revisit some of these models in their newer forms later this year as well. However, this Lenovo-Razer love child is still available for purchase.

This PC is sitting at $1,700, as Lenovo looks to clear out its remaining stock of Intel Skylake processors at more attractive prices for those who may not want to build their own. Lenovo bundles the Y900 with Razer-branded gaming peripherals, including an RGB mechanical keyboard and gaming mouse.

The Lenovo IdeaCentre Y900 Razer Edition features a black steel and plastic chassis, with RGB LED accent lighting adorning the front panel (which resembles carbon graphite, but isn’t) and its bottom edges. An optical drive is hidden behind a hinged 5.25” bay cover, which can be opened by pressing the button at the bottom right corner of the top slot.

The top panel sports fins that direct ambient heat up and away from the case, but there isn’t a fan under them to aid that effort. The top panel is also where the power button resides, with the front panel I/O nearby on the top edge of the case where the front and top meet. Four USB 3.0 ports, an SD card reader, and 3.5mm headphone and microphone jacks give you plenty of connectivity in a convenient spot.

The back of the chassis features the rear motherboard I/O panel, which includes four USB 3.0 ports, two USB 2.0 ports, and a PS/2 combo port (for those old-school keyboard enthusiasts). A single gigabit Ethernet port (powered by a Qualcomm Killer E2400) can get you online if your router is nearby. The motherboard also has DVI-D, HDMI 1.4, and D-Sub ports for display output. However, these interfaces have been capped off with a plastic cover, because the primary output is the dedicated GPU, with its three DisplayPort 1.3 ports in addition to an HDMI 2.0 and DVI-D port.

The front panel can also be removed by pulling on the bottom left side of the panel, and it swings open like a door hinged on the right side. This exposes the front fan dust filter in addition to the optical drive, if you ever need to replace it or add another. The underside of the case features a removable dust filter for the power supply air intake, which easily slides in and out so you can keep it clean.

To open the case, the Y900 features a clever locking mechanism for the windowed (left) side panel. On the back of the chassis, just above the rear output fan, there is a locking switch. Pressing it to the left unlocks the side panel from the case. Pushing down on the back end of the top panel (which is actually a button) will pop the panel out, with an inner ledge of it acting as a hinge along the bottom edge of the case (left to right). This is different from traditional cases, which are usually seated this way along the front of the case (from top to bottom).

Under the hood, we’re greeted with a familiar system layout, with an interior that is more in line with a DIY case than a big-box brand chassis. An Intel Core i7-6700K sits atop a custom Lenovo ATX motherboard with an Intel Z170 chipset, and it’s cooled by a black aluminum heatsink with a 120mm fan. Airflow should be adequate with two 120mm front intake fans, a 120mm rear exhaust fan, and the aforementioned CPU heatsink fan. Oddly, the rear fan has LED lights, but it’s the only one of the four that does.

A single 16GB stick of DDR4-2133 resides in the memory slot furthest to the right of the CPU. We’re somewhat disappointed by the single RAM module, which can hamper performance in memory-intensive workloads. The DVD-ROM and its SATA power and data plugs are visible just to the right of the memory, and it’s attached to the case with a convenient push-button locking mechanism for easy removal.

An Nvidia GeForce GTX 1080 Founder’s Edition graphics card is seated in the primary PCIe x16 slot, portending gaming greatness. The rear PCIe plates (and GPU) are held down by a special plastic locking mechanism, which makes adding or removing PCIe cards easier. The case also features a GPU bracket, which is attached to the front end (blower side) of the graphics card to give it added support and prevent GPU droop. It is locked in place by a sliding tab; pushing down on it will release the GPU from the case.

A 256GB Samsung PM951 NVMe SSD is installed in the motherboard’s PCIe 3.0 x4 M.2 slot, located below the GPU. This should provide excellent sequential read and 4K IOPs performance. Directly below that, the Qualcomm Killer Wireless AC 1535 module is installed in another M.2 interface. The 1TB 7200 RPM Seagate HDD is mounted in a removable 3.5” drive bay at the bottom right of the case (with an empty 3.5" tray for another drive, if you want to add one down the line), and the total storage capacity of the system is quite standard for the average consumer. However, there is also an unused 2.5" bay above the high-capacity storage, and it's nice that Lenovo gives you the ability to build up if the stock capacity doesn't suit your needs.

An unbranded 650W 80 Plus Bronze certified power supply is installed in the bottom rear of the case, with its braided cables fed to the backside (right side) of the case interior. The RGB LED controller is mounted at the bottom of the chassis, between the PSU and 3.5” drive bay, and it uses a USB 3.0 front panel plug to connect to the motherboard.

The cable management isn’t the neatest in the world, with the PCIe power cables attached to the GPU haphazardly bundled together near the 5.25” drive bay. However, this isn’t a deal-breaker, as the windowed side panel reveals little more than the glow of the graphics card. Removing the right-side panel reveals an organized mess of cables. Metal clips built right into the case hold the cables down, with a large plastic locking clip for the main batch of cables. This is a nice touch, but we’d imagine replacing the power supply or a fan wouldn’t be a fun foray.

A definite downside to a big-brand gaming PC is the amount of extra software (often called bloatware) that comes with the product. The Lenovo IdeaCentre Y900 is no different in this sense, coming pre-loaded with CyberLink Power2Go, PowerDVD, DAI, and a trial of Microsoft Office. However, the company also included an App Explorer, which suggests available software from Lenovo's partners, but doesn't automatically install it. There are also decidedly useful applications, including Lenovo Nerve Center, which allows you to turn on the automatic CPU overclock and monitor temperatures, and Lenovo Rescue System, which could be a lifesaver in the event of a critical system failure such as a corrupted OS or virus infection.

A Razer co-branded gaming PC wouldn’t be complete without company-branded peripherals and software. The Lenovo IdeaCentre Y900 Razer Edition comes with a Razer Blackwidow Chroma mechanical keyboard and a Mamba Tournament Edition gaming mouse. To support these devices, Razer software utilities including Comms, Cortex, Surround, and Synapse are all pre-loaded.

Next Page Synthetic & Productivity Benchmarks
10 Comments Comment from the forums