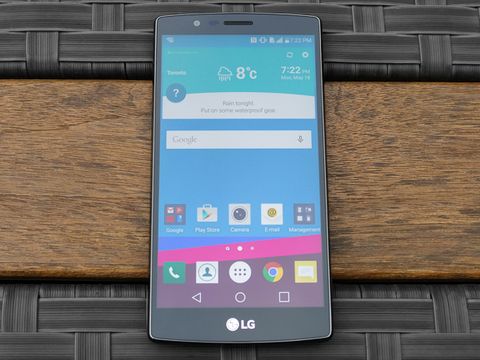 The overheating and performance issues LG encountered with Qualcomm’s top-tier SoC, the Snapdragon 810, in the G Flex 2 seems to have pushed it to use the next best option in the G4. For a little background about its architecture and features, as well as the controversy surrounding it, you can read our Snapdragon 810 Performance Preview article that goes over them in detail. In short, in order to compete with Apple’s 64-bit SoC, Qualcomm was forced to move away from its custom 32-bit Krait CPU architecture sooner than planned. Building an SoC with four powerful Cortex-A57 CPU cores on TSMC's 20nm HKMG planar process ultimately proved too much to fit into a smartphone power envelope, causing significant overheating. The 810’s design seems to have been rushed overall, as the chip’s layout does not appear to be well optimized and we have yet to see the 810’s new LPDDR4 memory controller reach advertised speeds.

The Snapdragon 808 is still made on the same 20nm process as the 810, but it drops two of the power-hungry A57 CPU cores, which should reduce the thermal output of the SoC somewhat and possibly allow the two remaining A57 cores to participate more often at higher clock speeds. In fact, there is a chance that from a pure CPU performance perspective that the 808 will perform better than its big brother. The 808 also uses Qualcomm’s tried–and–true LPDDR3 memory controller, avoiding the issues encountered with the new design.

It’s not all wine and roses for the G4’s SoC, though. The Snapdragon 808 has a few other deficits when compared to the 810, and the most worrying is its GPU. While Qualcomm does not share too many details about the specifications of its GPUs, the very naming of the 808’s Adreno 418 GPU puts it a step below both the 810’s Adreno 430 and the 420 used in last year’s Snapdragon 805. The 808 also sacrifices memory bandwidth, which provides a hint as to how the Adreno 418 GPU will perform.

One of the problems with the G3 was its GPU was not powerful enough to consistently provide a smooth experience when running games at its native QHD resolution. Our performance testing will determine if the choice of the Snapdragon 808, with its lower CPU core count and slower GPU and RAM, proves to be a good choice for the G4. Will the 418 GPU be powerful enough to handle the QHD display? Will battery life improve over the G3?