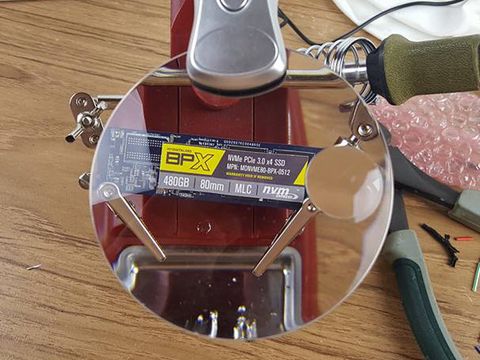 In this set of tests, we examine 256GB-class NVMe SSDs to see how the MyDigitalSSD BPX 240GB compares. We don't have a Samsung PM961 to represent the upcoming 960 EVO in this round, but the Intel 600p and Patriot Hellfire M.2 join higher-priced NVMe products from OCZ and Samsung.

Smaller SSDs suffer from reduced parallel I/O to the NAND, which often hamstrings performance. Companies advertise four-corner performance, and we often see some slight performance variation on the specification sheets. Our testing and experience tell us that sustained performance often suffers even more. SSDs also slow down as you store more data on the drive. Smaller SSDs will fill faster, and users typically have a base amount of data after the initial installation. The operating system, office, and other general applications vary by user, but we often find the base software install consumes as much as 30GB.

To read about our storage tests in-depth, please check out How We Test HDDs And SSDs.We cover four-corner testing on page six of our How We Test guide.

The sequential read performance for the 600p and BPX appear nearly identical to the gap on the previous page. The BPX 240GB outperforms the 600p at most queue depths. The 600p achieves parity at QD4 and 8, but its results before and after fall to the BPX.

The Patriot Hellfire M.2 240GB achieves a slightly higher sequential read performance throughout the entire test. The difference between it and the MyDigital BPX is slight at best. Under any condition, you wouldn't notice the ever-so-slight gap while transferring files from these products without a throughput meter.

The sequential write test reveals a lot of variation between all of the products in the 256GB NVMe class. The majority of the drives don't cluster together, other than the Hellfire M.2 and the Samsung 950 Pro. The MyDigitalSSD BPX 240GB trails both the Patriot and Samsung by 100 and 150 MB/s, but it outperforms the Intel 600p to the tune of 200 MB/s.

The random read performance chart shows the clear distinction between MLC and TLC flash. The difference is minimal at very low queue depths, but the gap gets larger as the workload intensity increases. We place a heavy emphasis on strong random read performance because it has a tangible impact on the general applications in real-world environments. All of the tests target some function or a specific set of functions, but random reads touch nearly every aspect of the computing experience.

The Intel 600p fails to launch after establishing a QD1 random write performance of 32,000 IOPS. It does increase slightly, but nothing like the other products on the chart. The MyDigitalSSD BPX 240GB starts the test much stronger with nearly 45,000 IOPS and then scales as we increase the workload intensity.

The 512GB Intel 600p outperformed the BPX during the mixed sequential workload, which was its only performance win. The BPX 240GB doesn't suffer the same fate and clearly takes the lead over the 600p, but the difference is still fairly minute. Moving up the food chain, the Hellfire M.2 is slightly faster than both the BPX and 600p.

The Intel 600p 256GB delivers roughly half of the mixed random performance that the 512GB model did. The MyDigitalSSD BPX 240GB doesn't suffer the same decline at higher queue depths. Both drives start with roughly 20,000 IOPS, but the scaling rate as we increase the queue depth is quite a bit different.

Half of the products on the chart were built with prosumer workloads in mind. The other half fall under a strictly consumer-focused group. The sequential steady-state test shows a clear distinction. The low performance is a radical departure from what we've come to expect from NVMe products in the last year as they've become available to consumers. MLC NAND still provides the best performance under heavy workloads, and that won't change anytime soon. The two Phison SSDs with MLC flash provide a better user experience under heavier workloads compared to the Intel 600p and the other TLC-based products coming to market over the next two months.

Small capacity entry-level NVMe SSDs that sell at a very low price point will eventually come into contact with Intel's PCH RAID. The MLC flash advantage also makes a RAID array more powerful compared to TLC-based products. Of the drives shown on this chart, only the Samsung SM961 delivers high performance and solid performance consistency. The purple line shows us an ideal level of performance for a consumer RAID array, and the others exhibit the type of performance that results in inconsistency.

The BPX 240GB delivers exceptional real-world application performance compared to the other products. This performance variation within the group is very small, but we do see some outliers. The Intel 600p trails the others in every test.

Until the MyDigitalSSD BPX, the Intel 600p could write off its low performance due to its equally low price. The MyDigitalSSD closes the price gap with the 600p, but it delivers very good performance that comes courtesy of its Toggle MLC flash.

The products with a focus on prosumer use stand out in an isolated tier during heavy workloads. The two Phison E7-based SSDs cluster together while the Intel 600p 256GB trails. Under moderate workloads, the two Phison NVMe SSDs join the prosumer products, but the Intel 600p trails the group by over 100 MB/s.

The service time test reveals the same three performance tiers, but it also highlights a much larger disadvantage for the 600p. This is where things get very interesting. The new Phison E7 firmware with its increased focus on background activity outperforms the other products in the test pool--even the two powerful Samsung SSDs with V-NAND. A drive works much better when it is nearly full if the company optimizes the processes for real-world software performance and efficient handling of background activities like garbage collection, TRIM commands, and wear leveling. We feel that characteristic is more important on smaller SSDs because you will fill them much faster. The new firmware does a very good job of keeping flash cells ready to accept fresh data.

The disk busy time test results mimic the 480GB models. We would normally look to this area to help explain notebook battery life results (in the next section), but the Phison E7 controller and firmware have other demons at play that hurt battery life.

Phison has been unable to replicate our low notebook battery life results with the E7 controller. The company is currently working to secure a Lenovo Y700 to isolate and correct any conditions that cause the Hellfire M.2 and BPX to suffer from an energy draining condition. We hope to hear back soon and will report the findings.