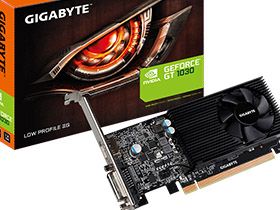 Given the GeForce GT 1030’s resource deficit compared to Radeon RX 550, Nvidia fares remarkably well with GP108. In older DirectX 9- and 11-based games, it’s typically faster, while newer DirectX 12- and graphics-bound Vulkan-based workloads like Doom favor AMD’s GCN architecture. Dota 2 under Vulkan is a special case in that our Core i3-6320 seems to get in the way, and in platform-bottlenecked situations, GeForce cards do tend to fare better than Radeons.

We can’t help but think that this is the inverse of what you’d want from GeForce GT 1030, though. The older titles we tested already run at higher frame rates, facilitating better-looking detail settings before they start slowing down. Meanwhile, it’s all we can do to get Battlefield 1 and Doom smooth at their lowest quality presets at 1920x1080. It’d be great if performance were better in those situations, rather than the games averaging 100 FPS+.

Nvidia counters that gamers spending $70 on a graphics card play titles like League of Legends, Dota, and Rocket League, though, not Battlefield. We don’t doubt the company is right. After all, those are the same names AMD was going after when it briefed us on Radeon RX 550. In the context of DirectX 9/11-based software, games bound by platform performance, and popular eSports titles, then, GeForce GT 1030 is faster than Radeon RX 550. It's also less expensive and a lot more power-friendly.

Still, we’d like the option to experiment with any game on the PC. If you plan on playing newer DirectX 12 titles, the advantage we’ve seen from AMD’s faster cards carries over to the entry-level space. Its Radeon RX 550 averages more than 60 FPS in Battlefield 1 at 1920x1080 on a Core i3-based system. Even if it means tolerating the Low quality preset, at least the experience is fairly smooth. GeForce GT 1030 musters about 80% of the Radeon's performance in that situation.

Of course, we're assuming that your machine can accommodate the Radeon. The 4GB Asus RX 550 we tested occupies a full-height, dual-slot form factor. Meanwhile Gigabyte’s GeForce GT 1030 Low Profile 2G only monopolizes one slot. A bundled half-height bracket quickly adapts the card for the smallest of enclosures. In short, if your PC has an open PCIe slot, this GT 1030 should fit (and we’ve seen some highly non-standard case designs from the likes of Dell, HP, etc.). We’re sure the HTPC crowd will appreciate this flexibility (in addition to HDMI 2.0b support and eighth-gen PureVideo decoding hardware).

So back to the question we posed at the outset of our review: does GeForce GT 1030 keep up in our benchmark suite, at least enough to earn a position in Best Gaming Graphics Cards? Given that our opening category is Best eSports & HD, and in light of the GT 1030’s excellent handling of those titles at a 30% discount compared to RX 460, yeah, a recommendation is warranted. Just be aware that there is a point where the Radeon starts pulling ahead in a profound way. At that point, though, you might want to consider a Radeon RX 560 or 570 instead to enjoy more taxing DX12 games at higher quality settings.

Prev Page Clock Frequency, Temperature & Noise
28 Comments Comment from the forums
Be In the Know