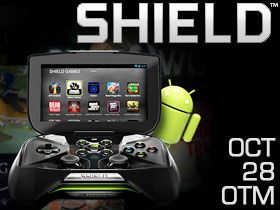 The PC will always be my entertainment platform of choice. But there are times when mobile gaming is a lot more convenient: as I sit in the car, waiting to pick my wife up from the grocery store, any time I stand in a long line, and even when I'm sitting on the couch, trying to relax after a long day of work. I don't get serious about mobile gaming, however, unless I'm traveling by air. That's when I can really bite into content that I wouldn't have touched at home.

Understandably, then, I was excited about my first extended stint with Nvidia's Shield mobile gaming console on a flight back to Winnipeg from Montreal (remember, Chris Angelini was the one to write our Shield review back in July). I downloaded a handful of titles from the Google Play store, waited patiently for the stewardess to give me the go-ahead, and I went to town. First, I tried Ravensword 2, which is probably the closest thing that the Android platform has to The Elder Scrolls V: Skyrim. No luck. The Shield's controls aren't supported in the title's gamepad mode. Undaunted, I fired up Galaxy on Fire 2 HD. Once again, no joy. The controller isn't recognized.

There are some really impressive games developed with native Shield support, but those weren't the ones I wanted to play on my flight. One of Android's strengths is a plethora of choice. So, it really seemed like Nvidia missed the boat as a "pure" Android-based gaming platform. I spent the rest of my flight gaming on my Google Nexus 7 tablet, smoldering over the Shield's wasted potential.

A few days later, Nvidia totally surprised me with new functionality. Included in today's over-the-air (OTA) update is a feature that instantly turned my opinion around: the Shield Gamepad Mapper, which lets you map the Shield's joystick and buttons to screen positions, virtual thumbsticks, and even gestures.

Before we dig into the new Gamepad Mapper, let's go over all of the changes rolled into the update:

Nvidia's Holiday Game Bundle launches today, and is available two ways. Enthusiasts who buy a GeForce GTX 770 (now priced at $329), 780 (down to $500), or Titan are entitled to Batman: Arkham Origins, Splinter Cell: Blacklist, and Assassin's Creed: Black Flag, in addition to a $100 discount on an Nvidia Shield.

Today is also the official release of Nvidia's ShadowPlay feature, though it's still in beta. This is Nvidia's real-time game video recording feature that offloads encoding to the Kepler architecture's fixed-function NVEnc block. It's not related to the Shield update, but we're still putting it through its paces.