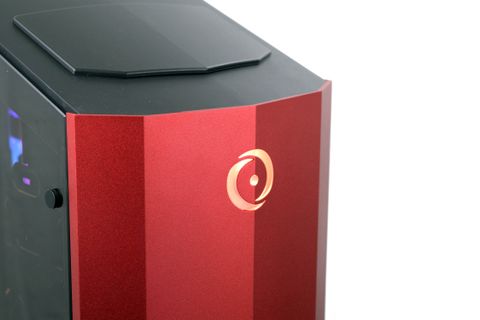 The Origin PC Millennium's overclocked GTX 1080 Ti graphics cards (in SLI) propelled it well beyond our stock-clocked Z270 test rig with a single card, netting triple-digit average framerates at 1920x1080 and 2560x1440. At 4K (where the GPU becomes the bottleneck), the lead against the previous-gen test rig is less pronounced. DX12 multi-GPU support doesn't give as high of a framerate gain as we'd think (remember: the CPU and GPU are overclocked, and our test rig is not), but the Millennium nets well over the target 60 FPS that an enthusiast aims for at 3840x2160.

Bioshock Infinite doesn't stress most modern graphics cards (the game is getting on in age), a point made especially obvious with the Millennium's overclocked GTX 1080 Ti graphics cards averaging triple-digit framerates at 4K on the most-demanding settings the game has to offer. However, it's no coincidence that its minimum framerate (which is usually associated with CPU horsepower) is nearly identical and much lower than our Z270 test bench's single GTX 1080 Ti setup. Although an SLI setup gives the Millennium a significant boost in average framerates, the driver overhead seems to hinder the processor just enough to make performance dip lower than half the minimum framerate of the single-card test bed, even if it is just for a second. Still, this hiccup doesn't take anything away from the Millennium's performance, with average framerates around 305, 271, and 180 FPS at 1920x1080, 2560x1440, and 3840x2160, respectively.

The Origin PC Millennium provided triple-digit average and minimum framerates in DiRT Rally at 1920x1080 and 2560x1440, making it an ideal pairing for a 120Hz (or even 144Hz at 1080p) display at those resolutions if you want to race around without any blips or dips in framerate. At 3840x2160, the Millennium still netted average and minimum framerates above 60 FPS, proving yet again that this Origin PC rig is equipped for ultimate 4K performance.

The Millennium again proved its 4K gaming dominance in the GTA V benchmarks, where it averaged above 60 FPS at the most crushing settings at 3840x2160. At lower resolutions (1920x1080 and 2560x1440), the leads against our single-GPU Z270 test bench were less pronounced, with the CPU horsepower somewhat limiting the graphics potential, evidenced by the small margin of the average framerates between the results at 1080p (around 110 FPS) and 1440p (102 FPS), with a difference of about 8 FPS.

When the bottleneck shifts to the GPUs at 4K, the margin drastically increased (it dropped about 40 FPS average, compared to 1440p), but the overclocked GPUs and impressive SLI scaling still averaged roughly double the framerates of our single-card reference system at 3840x2160.

Similar to our Bioshock Infinite results, where SLI driver overhead resulted in lower minimum framerates, the Origin PC Millennium was dealt its first gaming performance loss in the Hitman benchmarks, due to the multi-GPU graphics configuration, which actually hinders performance with Direct3D 12 enabled. Multi-GPU support for this title is less than stellar, accentuated by lower minimum and average framerates at all tested resolutions. Shifting to DirectX 11 would likely resolve that issue, but SLI scaling doesn't do the Millennium any favors in this particular game at these settings.

The Millennium returned to its regularly scheduled badassery in the Rise of the Tomb Raider benchmarks, where it averaged nearly 125, 98, and 53 FPS at 1920x1080, 2560x1440, and 3840x2160, respectively. The game is highly demanding on the hardware with all the details and eye candy turned up to the maximum, but impressive SLI scaling in DX11 pushed the Millennium's average framerate to a more-than-playable average framerate at 4K, whereas the single-GPU Z270 test bed could barely make it to a minimalist 30 FPS at those settings.

The Division isn't as demanding at 4K as ROTR (evidenced by our Z270 test bed's average framerate being higher in this game), but the Millennium's dual-GPU setup didn't perform much better than our single-card reference rig. This is because The Division is also plagued with shoddy multi-GPU support under DX12, and we had to run the tests with only one graphics card enabled (that is, SLI disabled). The Millennium's lead is due to the overclocked CPU and GPUs, and having an extra graphics card doesn't do you any favors in this particular scenario.

The Millennium wrapped up our test suite by driving home both the positive and negative aspects we've expounded on throughout our gaming benchmarks. Multiple GPUs can affect performance in a variety of ways depending on the game, and our Shadows of War results certainly shows that. At 1920x1080, the Origin PC beast takes a loss to our single-card test rig by a 3 FPS average. We first thought that SLI support (which the game has) was actually detrimental to performance (and at this resolution, it is slightly), but raising the resolution shifted the bottleneck to the GPUs (which, it turns out, are actually working in SLI). That pushed the Millennium considerably ahead of our single-GPU Z270 reference machine, with a lead of 16 FPS and 30 FPS at 2560x1440 and 3840x2160, respectively.

This means that the CPU is hamstrung at lower resolutions due to driver overhead, similar to the results from Bioshock Infinite. However, 4K is where the Millennium shines and is meant to play, and it has no issues providing excellent framerates with the most demanding settings the game has to offer.