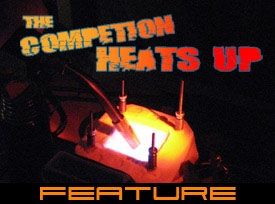 It’s been incredibly busy around our Culver City office for the past month or so, while preparing for our first-ever Overdrive overclocking competition. For more information on the contest itself, please check out Overclocking Goes Int’l.: Overdrive In The USA. If you’d like to see some of the pictures we were posting semi-live as the event transpired, you can check those albums out here (Tom’s OC Competition: Mid-day Pics ) and here (Tom’s OC Competition: LN2 Craziness ). We also posted a video of some of the event’s highlights. Check out VIDEO: Tom’s Overclocking Competition.

But the purpose of this piece is to give you a play-by-play of how things went down, to introduce you to our winners and, in the conclusion, present you with a video interview of the guys who’ll represent the United States in our international finals next month. We’re used to seeing world records being broken by fiercely competitive teams from Greece, Taiwan, and other countries hosting serious overclocking talent. Show your support for Team USA, though—they’re going to be working with high-end Core i7 equipment. The potential to set brand new world records will be there, and we hope to take home the competition’s grand prize.

The list of contestants who flew and drove in to compete looked a little something like this:

All 12 of our overclockers proved to be not only seasoned veterans of hardware tweaking, but also true gentlemen and outright good sports. We saw plenty of help and advice flowing between the four teams, even as the group kept its collective eye on our score board, which was kept updated in real-time. A sincere thank you to all 12 for sharing the weekend with us.

We started our first day off bright and early, setting up the outdoor venue at 6:45 AM. At 8:00 AM, the hardware was handed out and each team set to work prepping the gear. If you’ve never overclocked competitively, you’d be amazed at the work that goes into readying a complete platform for two days worth of abuse. Each team approached the process differently, which was surprising, given that they were all ultimately aiming for the same bull’s eye.

The gentlemen from Team 5G, for instance, meticulously put together their platform, first coating the MSI P45-based motherboard with liquid electric tape to protect every surface against the damaging effects of water condensation. The group disassembled its GeForce GTX 280 and covered it completely in insulation while mounting a custom copper pot for LN2. The preparation process proved to be quite in-depth—so much so that by the end of the first day, Team 5G only had one score on our board. Nevertheless, the prep work proved invaluable, as even the worst condensation didn’t faze the board, processor, or graphics card. As a result of the upfront effort, 5G didn’t run into problems for the duration of the contest.

Next Page Day One: Continued
2 Comments Comment from the forums
Be In the Know