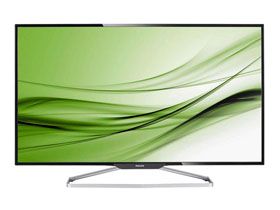 The BDM4065UC comes boxed like a television in a shallow carton with both stiff and soft foam protecting the contents. It’s lighter than you’d expect given the size but we suggest carefully inspecting your shipment if you buy mail order.

The accessory bundle includes an IEC power cord, cables for HDMI, VGA, USB 3.0 and analog audio. There is also an RS-232 connector for control purposes. Curiously there is no DisplayPort cable in the box. The HDMI inputs only support 3840x2160 resolution up to 30Hz. If you want 60Hz, you’ll have to source your own DP cable.

Rounding out the bundle is a CD-ROM with the user manual and a printed quick start guide.

When you unpack the BDM4065UC, have a Phillips-head screwdriver at the ready because you’ll need it to assemble the base. It’s made from a nice piece of cast aluminum and a thick stamped-steel part connects it to the panel. Once complete the package is very solid but there is no adjustment provided. It’s a shame there isn’t at least a tilt function because the panel is held at a perfect 90-degree angle to your desktop and sits only three inches from the surface. We wish it could be raised a bit because it’s otherwise quite comfortable to use at a 36-inch viewing distance.

The screen coating is a little glossier than a typical monitor but still capable of managing reflections. With so much area, you’ll need to take a bit more care with your lighting to prevent glare. The picture is razor-sharp however as the TFT layer is very close to the front with almost no air gap.

Here is a close-up of the aluminum stand. It looks spindly but it holds the panel solidly. It doesn’t hurt that it only weighs 21 pounds but there is no wobble at all. If you’re looking for the OSD controls, you won’t find them in the usual spot. Feel around the back of the lower right corner and you’ll find a joystick that handles all menu navigation. There’s more about it on the next page.

You can’t see the speaker grills in this photo but they are on either side of the Philips logo and face downwards. Their frequency range is small and they sound a bit harsh but they’ll play plenty loud. We set the volume slider on 60 (out of 100) for a comfortable listening level.

From the side the BDM4065UC isn’t much thicker than smaller monitors. A small bulge at the bottom means you’ll have to be careful when selecting an aftermarket wall mount. The panel won’t quite sit flush but if the bracket is more than half-an-inch deep, you’ll be fine.

Further complicating the wall-mount are the USB and power connections which face backwards. You’ll need at least two inches clearance for the power cord. That at least ensures the vents will receive proper airflow. You can’t quite see the OSD joystick in this picture but we’ve provided a better shot on page three. The VESA mount is 200mm so if you plan to use your own bracket or stand, be sure to get the larger size.

The input panel runs up the panel’s left side and includes two DisplayPort connectors, one of which is mini. Philips doesn’t specify the version but it’s at least 1.2 since you can input a signal of 3840x2160 at 60Hz. The two HDMI inputs are likely 1.4a since they only support the full resolution at 30Hz. One of them is MHL compatible up to 1920x1080 pixels at 60Hz. You also get a legacy VGA input which is also limited to 1080p/60. The analog audio jacks consist of one input and one output for headphones or powered speakers. Not pictured is the RS-232 input which can be used to control the BDM4065UC through an automation system like Crestron or AMX.