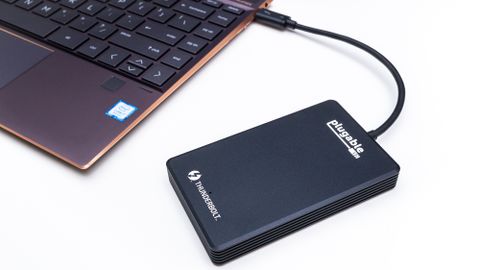 Plugable’s new Thunderbolt 3 NVMe external SSD offers great performance at a price undercuts the competition by hundreds of dollars. It's an excellent value, but there are some compromises that come with that cheaper price tag.

High-bit-rate video consumes large amounts of space pretty quickly and make getting your video on and off your storage a time-consuming task without the right gear. You'll have to pay a bit more for it up front, but the faster speeds from pricier products like the Plugable TB3 NVMe external can help reduce the time you spend waiting and help you direct that time towards doing actual work.

External storage can be rather boring to some, but it's an exciting topic for those who actually need it -- and need it to be fast. While I’ve  tested my fair share of external storage devices, most aren't as fast as this drive from Plugable.

Your typical external HDD can hit speeds of 130 MBps. And SATA-based external SSDs can edge over the 500 MBps mark. But with a PCIe Gen 3 x4 link directly to the CPU, Plugable’s new Thunderbolt 3 external NVMe SSDs can hit performance figures of up 2.8 GBps read and over 2 GBps write. And the Plugable drive come competitively priced to some of the other high-end storage devices on the market.

For basic backup tasks, most people just go straight for whatever the cheapest price per GB is at the time. For those looking for a bit more speed, SATA SSDs externals offer a big bump. But, for those who have a need for speed and want something to keep up with their internal NVMe SSDs for professional workflows, Thunderbolt 3 external SSDs are the way to go -- so long as the devices you use also have the requisite port.

There is a solid market for those who look to SSD-based externals to store and transfer their work data. And for videographers who constantly capture, transfer, and edit large files on a daily basis, there are serious benefits to be had by opting for the speediest portable external storage option available. Those users are the target market for this drive.

Plugable’s TB3 NVMe comes in capacities of 480GB, 1TB, and 2TB, making it perfect for storing the latest high-quality video. The 1TB drive is capable of storing 155 minutes of ProRes 422 HQ 4K video or 175 minutes of DnXHR HQ 4K video,  and the 2TB model doubles that.

Priced between $200 and $500 depending on capacity, the Plugable Thunderbolt 3 NVMe External SSD's pricing undercuts the Samsung X5, G-Technology G-Drive Mobile Pro, and a few other competitors, making it quite a value for its advertised specs. It also comes backed by a three-year warranty, which is slightly less than competitors but still fairly long.

Like its competitors, the Plugable drive is bus powered, so no extra cables are needed other than the integrated seven-inch Thunderbolt plug that comes tethered to the drive. Also like competing Thunderbolt 3 drives, this one will link up with the latest Thunderbolt 3 systems, but isn't compatible with USB. The drive comes preformatted as exFAT out of the box, so it is compatible with both Mac and PC, though our testing was completed while formatted as NTFS, to enable TRIM and for the sake of being consistent with other tests.

The device measures 108 x 65 x 9 mm and weighs in at 170 grams. The case is made of black anodized aluminum and aids in keeping the internal components safe and cool. It is also quite sleek looking, with cooling fins etched all around.

Opened up, we can see that Plugable is using an Intel DSL6340 Thunderbolt 3 chip and a generic Phison E12 and Kioxia (formerly Toshiba) BiCS3 64L TLC NAND flash-based SSD. This is a pretty good all-around combo.