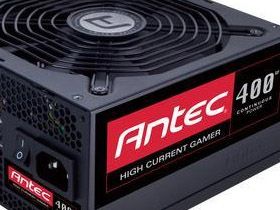 While we all love the latest, greatest, and fastest hardware, it's just as important to us that the more affordable, accessible components perform well. Today is the first story in a two-part series where we round-up power supplies you might find in the bargain bin of your favorite online store. We asked each vendor to send us samples with 80 PLUS Bronze ratings or better, selling between $45 and $70.

In this piece, we have power supplies from Antec, Chieftec, Cougar, and Enermax. The second part will include Cooler Master, Gigabyte, OCZ, and Seasonic.

This time around, we're looking at output ratings ranging from 350 W (Cougar A350) to 550 W (Chieftec Nitro 2). Each of the four models features an 80 PLUS Bronze rating, which means that they should all achieve at least 82% efficiency at 100% and 20% load, and 85% efficiency at medium load.

Unfortunately, not all of these units are available in the U.S., which makes price comparisons difficult. The Antec HCG-400 goes for around $45 though, which is pretty reasonable for a 400 W power supply.

Updates to Our Testing Methodology

Based on reader feedback, we're including acoustics in our testing suite. You'll see us do this moving forward, employing three load levels: 40 W as a simulation of an idle PC or a system engaged in light office work, 200 W for a medium-grade gaming PC, and 600 W for a high-end gaming PC. When 600 W is more than the maximum allowable combined load on the PSU’s 12 V rail or rails, we skip this test and make do with the other ones.

In order to simulate various loads, we built a test rig consisting of fifteen 12 V/40 W light bulbs. Thus, we can apply any load from 40 W to 600 W to the 12 V rail of a power supply, and it's guaranteed to incur no phase shift, since the load is neither inductive nor capacitive. As DC-powered light bulbs are perfectly silent, this is also a good way to measure sound levels without a lot of ambient background noise. We measured sound levels a foot away from each PSU's fan, and gave the power supplies 30 minutes to achieve an equilibrium after setting a new load level.

A Brief Remark about a Measurement Anomaly

All of the PSUs in this round-up exhibited a strange phenomenon during the ripple and noise test, which baffled us. They showed a strikingly similar pattern of spikes on the oscilloscope screen during the ripple test, causing all PSUs to fail that metric. Typically, this would lower each power supply's score. But because we knew it'd be unlikely for every make and model to suffer from the same design or manufacturing defect, we took a closer look at our test setup. We even asked Enermax and be quiet! to help us troubleshoot the issue with their equipment. The spikes didn't happen in either vendor's lab. So, after examining our test equipment, our cabling, and our test methodology, we were finally able to explain this annoying issue.

Recently, we swapped out the Tektronix DPO3034's probes with newer and supposedly higher-quality replacements. As soon as we switched back to the old probes, the spikes disappeared. It'd be natural to suspect that the new probes are defective. However, we've tested higher-end PSUs like Corsair's AX1200i with the new and old probes, and never saw any spikes.

After testing and retesting, we concluded that the brief spikes are real and are not caused by faulty test equipment. In fact, they could be caused by the probes having a wider bandwidth range. We deem them irrelevant to judging these PSUs, and we're disregarding them as we evaluate ripple voltage, though our screen shots and benchmark analysis do document them. After all, it's conceivable that even short spikes degrade or even damage some PSU components over time.