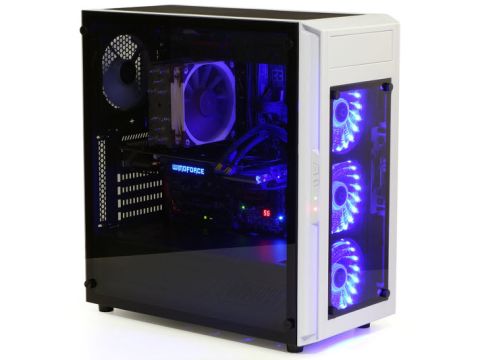 Glass can really hurt cooling performance, but that deficit can easily be overcome by increasing airflow. The Raidmax Alpha Prime has three intake fans, but still has too little airflow to match two of its competitors. A closer look at the fans revealed that they spin very slowly (with no RPM detection), and a closer look at the front panel reveals that these fans draw air from small slots on its sides. These features could prove beneficial in our noise measurement.

Unfortunately, the Alpha Prime’s noise level is roughly average and exceeded only by the open-faced Meshify C. At least the pitch of its fans is low enough not to be intrusive.

The Nova TG didn’t even have a power supply shroud, let alone RGB lighting, and the price relief of its reduced feature set put it far ahead of every other case in today’s comparison. Meanwhile, the Alpha Prime edges out the slightly costlier Aurora.

None of the comparison cases had the level of lighting present in the Alpha Prime, and builders preoccupied with appearance will certainly be willing to pay a little extra for that feature. The Alpha Prime is simply a stunning-looking case.

From a performance aspect, only the Meshify C and S340 Elite will appeal to users with the type of hardware used in our test, which includes a high-end graphics card and mildly-overclocked 6-core CPU. A larger CPU cooler would have helped, but our test configuration was set up to push cases that performed at this level to the edge of failure. Mission accomplished.

We’d say that buyers of the Alpha Prime might overcome its lackluster thermal performance by replacing its fans, but its fans are wired for its RGB controller. The case appears to make its best case to buyers of mid-performance PCs who want the bling of something far pricier.