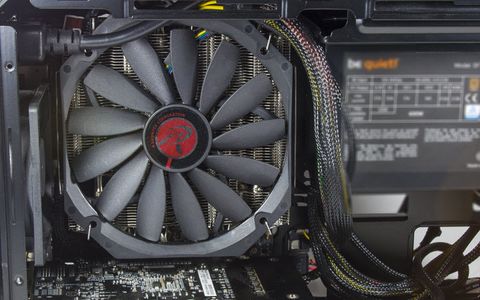 The Pallas performs acceptably for its price, but its size and clearance problems make it hard to justify versus similar-cost, better-performing options.

We're always ready to add a low-profile CPU cooler to our review series, but months have passed since any were offered. Fortunately, the load of samples Raijintek sent us for testing just happened to include, among other things, a 68mm-tall downdraft-style CPU cooler made specifically for compact gaming rigs and ultra-slim HTPC systems. Enter the Raijintek Pallas.

Raijintek offers the Pallas in two different flavors, with either an all-black cooling fan, or a red-framed fan with white blades. Both models carry the same $40 MSRP, although at the time of writing, we found them offered as low as $30 at some online retailers.

The Pallas comes packaged with an unsurprisingly standard set of hardware, including a combination AMD/Intel backplate, several sets of mounting hardware for various CPU sockets, a pair of fan clips, a packet of thermal paste, and a basic assembly manual. According to the packaging, the Pallas supports Intel sockets 775, 115x, 1366, and 2011, as well as AMD sockets FM1, FM2(+), AM2(+), and AM3(+). Although it’s not listed on the box, the Pallas also supports the new AM4 socket, though some buyers may end up receiving old stock without the updated bracket. Any customers affected by this can contact Raijintek, which will supply the new AM4 bracket free of charge.

The body of the Pallas consists of a copper base connected to a set of aluminum fins by six 6mm copper heat pipes. The assembled heatsink is nickel-plated for aesthetic purposes and to prevent corrosion of the copper base and heat pipes. Relying on a soldered heat-pipe junction rather than the direct-contact heat pipes found on other high-performance coolers, Raijintek says the heatsink, when paired with its custom 140x13mm cooling fan, is capable of handling CPUs with TDPs of up to 220W.

While the Pallas’s 68mm height may qualify it as a compact cooler in that dimension, its 153mm width and 150mm depth make it not so compact in others. Overall, the Pallas’ oversize footprint necessitates the use of low-profile memory and may cause additional clearance issues depending on motherboard connector placement and the height of other motherboard features, such as VRM heatsinks. In our case, the Pallas’ depth puts it almost even with the connectors on the top of the board, which makes it difficult to install the 24-pin ATX power cable, and impossible to install the USB 3.0 front-panel cable due to the height and rigidity of its connector.

Next Page Testing Results & Conclusion
5 Comments Comment from the forums