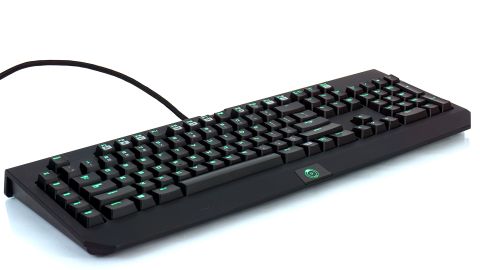 As mentioned in the introduction, Razer has been producing keyboards with and without certain features in order to please as many users as possible. The BlackWidow Chroma, however, has all of Razer's bells and whistles.

Razer's switches are rated for 60 million keystrokes, which the company will note is 10 million more than many other switches on the market, although that's all mostly just marketing talk. (If you clicked a single key every second of every day, 24 hours a day, it would take you around two years to reach 60 million strokes.)

These Green switches are both tactile and clicky, quite similar in feel and sound to Blue switches from the likes of Cherry and Kailh. In other words, those looking for that well-known linear feel and sound of Cherry MX Red switches should look elsewhere for their next gaming keyboard.

Under the wider keys (Shift, Enter, Backspace, and so on), Razer opted to use stabilizers sourced from an unspecified Japanese maker. These Costar-like stabilizers are not my favorite; they make the keys annoyingly hard to yank off, and when you do wrest a key from their grasp, you often have to fiddle with all the little parts that break free. Underneath each key cap are two tiny black plastic pieces into which a metal bar clips. The bar locks into two black brackets, which themselves are mounted into the keyboard's backplate.

It's hardly worth the hassle of messing with these keys, because it can be tricky to stick them back on correctly. It's also terribly easy to break one of the parts, and if anything is amiss when you put the key back on, you'll have problems. For example, you could end up with a disastrous amount of play in the wider keys, and if you strike one of them too far from center, it may not even actuate.

For a company as dedicated to crafting the perfect keyboard as Razer is, using these stabilizers is an unfortunate oversight, in my opinion.

The BlackWidow Chroma includes a full numpad as well as five macro keys running vertically down the left side, which ensures full typing and gaming key options for users.

Across the top of the keyboard, several of the F keys pull double duty as extra function keys. F1, F2 and F3 offer volume controls, and the F5, F6 and F7 keys are for playback (forward, back, play/pause). The F9 key doubles as the on-the-fly macro recording switch, and the F10 key has the Gaming Mode key (that disables the Windows key). Using the Fn key along with F11 and F12 adjust brightness, and you can put the PC to sleep with Fn+ Pause Break.

The lone Windows key is located to the left of the spacebar, and the Fn key is to the right.

I found the macro keys to be a bit too snug to the letter keys for my liking. I kept accidentally striking them because they were so close. Granted, this could be seen as a positive, as macro keys that are too far away from the letter keys make it harder to use them when you need to. Suffice it to say that typers may find the macro keys somewhat intrusive (unless you're a quite accurate typer, which I am not), whereas for gaming, the close proximity is more desirable.

On the right side of the BlackWidow Chroma, you'll find a USB passthrough port and a pair of audio jacks. The top cover of the keyboard chassis has a small lip that extends out just a few millimeters and obscures these ports from view, which is a nice little touch.

I'm not a fan of having these ports on the right side, though; inevitably, the connectors for my mouse and headset stick out far enough that it creates a mess near my mousepad. I find that I'm constantly pushing cables out of the way and bumping into the connectors with my mouse.

The overall design of the BlackWidow Chroma will be familiar to Razer fans. The chassis is all black, with a soft-touch top and a light-up logo (in this case, Origin PC) below the spacebar.

Again, as we're accustomed to seeing from Razer, the backplate is sunken in a bit and covered by a black plastic top. Compared to other boards with similarly clicky keys, it sounds to my ear that this design dampens the sound of the switches ever so slightly.

The backplate is plastic, and it's colored white so that the LEDs reflect off of it, ostensibly making the whole backlighting system appear a bit brighter than if it was backed by a darker-colored plate. The illumination effect is beautiful; the lighting is even and consistent, and it fills in the crevasses between each key perfectly even as it backlights the characters on the keys.

One qualm I have with the otherwise attractive soft-touch finish of the BlackWidow Chroma is that, like many such surfaces, it shows grease all too prominently, and it's difficult to wipe off smudges. Although the keys have a different finish—it looks almost sprayed on—I found that grease appears readily on those as well. Let's just say that after a few weeks of consistent use, my BlackWidow Chroma looks rather broken in.

Razer had the keys made from ABS plastic, and the characters are laser-etched. Then, the key caps are UV hard-coated to promote endurance.