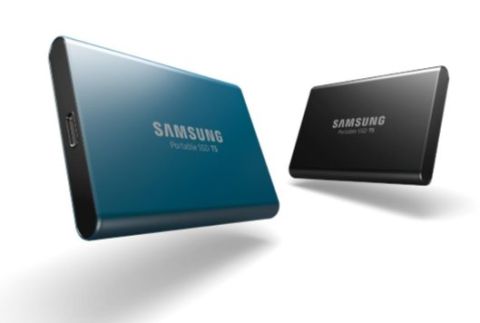 The number of low-cost portable SSDs has grown significantly over the last several months as SSD vendors continue displacing HDDs. The attack began with desktop and mobile PC's and is now spreading into removable storage products. It seems like two or more portable SSDs show up at my door every month. I thought we were supposed to be in the middle of a flash shortage!

We received a Portable T5 500GB and 2TB drive from Samsung. We also have a Portable T3 2TB from our review last year. We also included flash-based products from Adata and SanDisk. All these drives use SATA 6Gbps internally and expose a USB 3.1 connection to the host.

The LaCie Rugged RAID is the only portable HDD in the comparison group. This drive leverages two hard drives in RAID 0 to deliver comparable sequential performance to the flash-based devices, but it wields a superior 4TB of capacity and a lower price point.

Our first test measures throughput performance at different block sizes. We start with very small 4KB transfers and double the size until we reach 8MB. This is similar to how the ATTO Benchmark utility tests drives, but we use a queue depth (QD) of 1 instead of ATTO's QD4.

The Portable SSD T5 drives deliver strong performance in all transfer sizes. The read and write tests follow similar trajectories as we scale up to larger transfers.

The T3 and T5's provide very similar sequential read throughput. The Samsung SSDs are faster than many of the popular portable drives, but the faster bus doesn't provide a performance advantage at QD1 over the previous generation model. You will need to read more than one file at a time to take full advantage of the Gen 2 interface.

The drives also provide consistent performance across the usable capacity, unlike HDDs that slow as you store more data on the mechanical platters. Hard drives start out strong but can lose as much as half of the original performance depending on the position of the data on the platters.

With a sequential write workload, the T5 outperforms the older T3 by around 50 MB/s. This is much less than USB 3.1 Gen 2's theoretical 10Gb/s maximum throughput, but performance is within our expectations for the internal 6GB/s SSD.

The internal drives support up to 6Gb/s, but older systems with the USB 3.0 Gen 1 interface create a bottleneck.

Synthetic workload performance improvements don't always carry over into real-world gains. Flash management is complicated; the SSD doesn’t write data to the physical media in the traditional manner. Internally, these are very sophisticated systems that dynamically manage the flash to boost endurance.

We don't run many synthetic tests on external or portable storage products because the typical workload is sequential in nature. Even though it is possible, you won't run an operating system on these drives. The typical use case is very basic -- most of us simply read and write large pieces of data for archiving or transferring files from one location to another.

We often see performance measured in throughput, but time-based results are easier to interpret because the sense of time is universal. We tested transfer performance with an Avatar (2D + 3D Edition) Blu-ray ISO. For the Game test, we used rFactor to transfer data from the post-installation directory (C:/Program Files) to the portable drives. The Directory Test is a 15.2GB block of data I modeled for another project several years ago. It comes from a daily-use notebook and contains a mix of images, software installations, ISO files, and multimedia that yields a nice real-world workload.

The older T3 2TB outperformed the new T5 SSDs in two of the three tests. The new drives seem to run a different garbage collection algorithm that hinders performance.

Our 2TB T5 ran into an issue that reduced performance after a test that wrote data to the full LBA range. We suspect the issue stems from the garbage collection algorithms. In either case, Samsung had to send us a replacement drive. The T5 500GB seems to run background activities for longer than we expect, and it kicks on sooner than it does on similar products. Samsung is usually very good about delivering an excellent user experience, and I suspect we will see a firmware update with optimized code at some point.