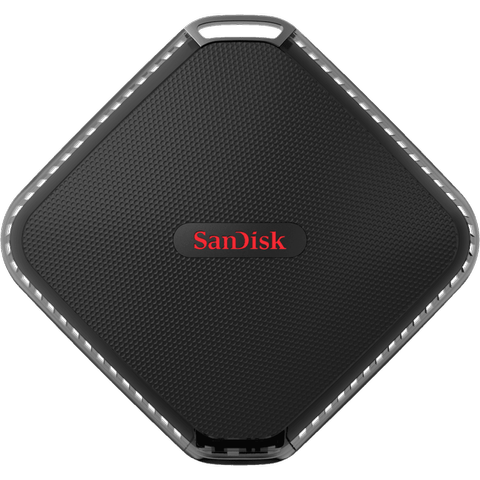 Overall, we like the SanDisk Extreme 500 Portable SSD and would buy one if needed. These products are not for everyone. Advanced thumb drives have increased in capacity and are smaller, but fail to deliver the same high transfer rates of data. The gap is getting smaller with each new generation, though. If you need serious performance that remains consistent, then the Extreme 500 is a better option. It's not the absolute fastest, but it's an excellent compromise in performance and value.

Portable flash-based storage was once a niche for professional photographers and enthusiasts who had to get the latest technology, but the segment is starting to heat up again. The economic slowdown is filling warehouses, and now manufacturers are looking for ways to move inventory. For flash fabs, that means anything storage-related gets a capacity increase and a price reduction.

SanDisk's Extreme 500 Portable SSD was introduced in June 2015. The company followed Samsung's T1 Portable SSD to market, but took a different path. Its Extreme 500 features dust and water (splash) resistance. In fact, it's a bit more rugged than the T1 and new T3, which allows professionals to worry less about the drive and focus on their jobs. Seriously. SanDisk works with a group of famous photographers and videographers called the Extreme Team. The company is known for its role in the A/V space thanks to a number of specialized products. Its media of choice is flash, but we're not just talking about SD cards here. High-res cameras generate large files that end up on repositories between the photo shoot and their final resting place, usually network-attached storage. Portable disks serve an important purpose in between.

The Extreme 500 Portable SSD ships in three capacities: 120GB, 240GB and 480GB. They all reserve some flash for background activity to ensure high-speed transfers. Physically, the drives are small, measuring around 2.5 inches square and less than half of an inch thick. Moreover, they weigh less than 80 grams, which is enough to remind you they're in your pocket, but not so heavy as to distract you.

There is a slight performance difference between the highest-capacity model and two smaller drives. We're testing the 240GB implementation, which is rated for 415 MB/s sequential reads and 340 MB/s writes. Stepping up to the 480GB version yields a small boost to 430 MB/s reads and 400 MB/s writes.

You'll connect the Extreme 500 to your PC or Mac via USB 3.0, though the drive is backwards compatible with USB 2.0. SanDisk includes a detachable USB 3.0 cable that gives you a little freedom if you want to use your own for more or less length.

We found the Extreme 500 Portable SSD selling on several online stores, and prices were all over the place. Newegg Business had the best deals across the board, offering SanDisk's 480GB drive for just $150. The two smaller sizes land at $100 (240GB) and $80 (120GB).

All three models include a three-year manufacturer warranty.

SanDisk bundles a paper manual and about 12 inches of USB 3.0 cable. You don't, unfortunately, get the new Type-C connector, which is what comes with the company's Extreme 900 Portable SSD.

You can use the Extreme 500 Portable SSD right out of its box. There is software already loaded on the disk for PCs and Macs; you'll want to install it for access to the advanced features.

SanDisk Secure Access 3.0 lets you safeguard your data with AES 128-bit encryption. There's also an upgrade available for it...

If you're willing to shell out a few more bucks, the encryption increases to 1024 bits. If the price of the Extreme 500 were not so low, we would unload on this approach. But since the hardware itself is fairly inexpensive, I'll simply say that I don't care for SanDisk's strategy. It reminds me of the satellite commercial where the guy has a credit card reader built into his remote control. Hey, honey, we have fees in here.

If you need the additional functionality, paying $13 isn't going to break the bank. But it should be noted that the encryption is software-based, not an accelerated capability of Silicon Motion's SM2246XT controller. It's good enough to stop local hoodlums from getting at your data, but I wouldn't bet a life sentence on keeping the NSA out.

SanDisk fills the retail package with details about the Extreme 500 Portable SSD. A front flap opens so you can see the drive.

The chassis is made of metal, so the Extreme 500 really is more hardware than the plastic-covered external disks we often come across. A rubber bumper along the leading edge acts as extra shock protection should you drop it. Fortunately, flash isn't susceptible to the same environmental variables as mechanical hard drives. Disk vendors build in enough protections to keep their products alive while they're moving or after a minor fall, but flash can technically take a direct hit from a baseball bat, so long as you don't bang anything up on the PCA.

The only design feature I don't like is the USB 3.0 port's plastic cover. Although the SSD is small enough to put on a key chain, don't use that cover for this purpose. Its construction is solid enough, but we can just imagine it breaking or coming detached from the drive.

Next Page Benchmarks And Conclusion
7 Comments Comment from the forums