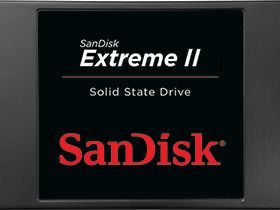 Extreme II, The Sequel From SanDisk

SanDisk hasn't really spent much time trying to break into the retail market. Its most notable effort was the original Ultra, a first-generation SandForce-based SSD. The drive didn't have much pep though, and it was up against fairly fast competition packing the formidable SF-2000 controller hardware.

Then again, companies like SanDisk don't really make their money selling drives online and through the odd brick-and-mortar outfit. Like Lite-On and Samsung, most of SanDisk's sales come from OEMs. Retail is usually a fraction of the overall pie, though it's acknowledged as an important piece of the whole. Making the move from selling drives in the OEM space to courting end-users directly isn't a walk in the park, either. Intel and Micron/Crucial started there to an extent, while companies like SanDisk and Toshiba are increasingly looking to play in the same sandbox.

You might not know this, but SanDisk and Toshiba collectively operate a joint venture under the aegis of Flash Forward. Intel and Micron have IMFT; SanDisk and Toshiba have Flash Forward. In essence, the two go halfsies on NAND fabrication. IMFT pumps out wafers of ONFi-capable memory, while Flash Forward makes Toggle-mode NAND. Samsung, the world's largest producer, keeps most of its flash for the company's own purposes, occasionally sharing it with special partners like Seagate. Intel/Micron and Toshiba will sell their production to almost anyone. But SanDisk, the biggest player in flash memory products for digital devices, holds on to what it gets for memory cards, thumb drives, and a range of proto-SSD storage products.

Speaking of SSDs, the first Ultra eventually gave way to a more potent SF-2281-based drive, the Extreme. SandForce's technology and Toggle-mode NAND have always been a powerful combination, but going the SandForce route isn't always advantageous for a company like SanDisk. Unfortunately, an inability to write its own firmware meant SanDisk's expertise in NAND manufacturing went to waste as it achieved similar performance as other SSD vendors. That partly explains the impetus behind recently-released products like the Ultra Plus, and the higher-end Extreme II we're looking at today.

Now, I know what you're thinking: naming something the Extreme II shows a distinct lack of imagination. Maybe so, but SanDisk's faster storage media for digital cameras shows up under the Extreme label. And regardless, we're far more concerned with what's under the hood.

The Extreme II ditches SandForce's hardware in favor of a Marvell flash processor (specifically, the Marvell 88SS9187). It's probably helpful to point out that SandForce's partners are locked into that company's firmware. Making major changes isn't in the cards, and there isn't a lot of available control over what the drive does or how it does it. Conversely, it's said that Marvell wouldn't write firmware for your fancy new SSD if you gave the company all the tea in China. Marvell's customers have to craft their own firmware. Stealing it might be a viable option. But in the end, we like the fact that each implementation is slightly different.

Writing the firmware probably isn't very hard. Making it truly outstanding is much more difficult. SanDisk adds another layer of complexity on top of its custom firmware package in an attempt to distinguish its drive from others based on the respected '9187. That layer is called nCache.

nCache isn't new, but it couldn't be implemented in previous SandForce-based SSDs without low-level firmware access. The Extreme II uses a variable-sized chunk of NAND operating in SLC mode to cache data for speeding-up low queue depth transactions, amongst other things (namely, caching small writes to commit to the MLC flash at a later time). It's difficult to say how large the cache is, but it's purported to be somewhere between 512 and 1024 MB.

According to SanDisk, the nCache system should generate a noticeable boost, especially with fewer outstanding commands in the queue (good news on the desktop, right?). It also helps rectify some of the shortcomings inherent to modern flash. As lithography shrinks and die capacity grows, page and block sizes increase as a consequence. Break down a trace of I/O activity and you'll find that most transfers are 4 KB in modern operating systems. Our Storage Bench trace is composed of a staggering 69.87% 4 KB transfers, and SanDisk believes that these smaller accesses are enhanced with a three-tier strategy: DDR3 DRAM, nCache caching, and MLC become its strategy to overcome the structural deficits of newer flash.

There are three Extreme II capacity points: 120, 240, and 480 GB. And there are two different packages available per drive: a desktop kit with a 3.5" sled and mounting cable, and a laptop kit with a 2.5 mm shim for 9.5 mm Z-height applications.