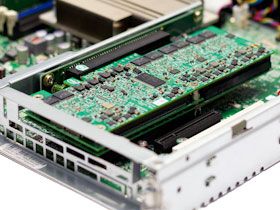 SSD 910 Gets A True Enterprise-Class Workout

While the virtues of SSD storage have been known for many years, the technology's steady march towards enterprise dominance has focused squarely on the form, fit, and functional replacement of 2.5” SAS-based hard drives. In the data center world, that means you still have large racks of hot-swappable drive carriers, RAID cards, and supporting infrastructure.

PCIe-based SSDs are an attempt to reduce or combine all essential components in the storage chain. This reduction has multiple benefits, including lower cost, higher performance, higher reliability, and tighter integration. That last point is especially important when talking about solid-state technology. Compared to mechanical drives, SSDs can best be described as finicky. Their performance changes based on previous operations, they periodically execute maintenance tasks n the background, and they have a very specific life cycle. These idiosyncrasies, which are a nuisance for consumer applications, become deal-breakers at an enterprise level. The tight end-to-end (host interface to controller to NAND) integration of PCIe-based SSDs means that the entire package should operate in a single, harmonious state. At least, that's the theory.

The drive family is available in 400 and 800 GB capacities, available on the street for $1999 and $4499, respectively. Both flavors feature Intel’s 25 nm High Endurance Technology (HET) MLC NAND, the same stuff we covered in Intel SSD 710 Tested: MLC NAND Flash Hits The Enterprise. When the SATA-based SSD 710 first launched, its capacity was valued at $6/GB. Now, we're looking at less than $5/GB for enterprise-class solid-state storage. Intel packages it all together in a half-height, half-length PCIe 2.0 x8 card.

When it comes to high-end storage, details matter a lot. But if you find yourself reading the first and last pages of this piece, let's cut right to the chase in order to make something clear: Intel's SSD 910 doesn't blow away its competition with sequential throughput or random I/O numbers we've never seen before.

The good news for Intel, however, is that judging this particular piece of hardware based on its spec sheer doesn't convey the whole story. Enterprise-oriented customers value quality and reliability as much or more than raw performance. With that in mind, Intel is in a particularly good place. Its X25-E was the gold standard for many years, and its SSD 710 family continues that legacy.

Will well-established quality and reliability be enough to propel Intel out ahead of the pack in a rapidly-expanding and continually-evolving PCIe-based SSD market?