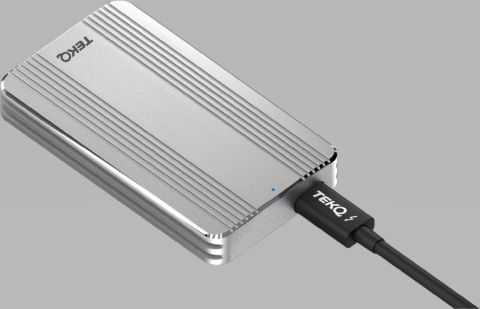 Last year, the MyDigitalSSD BOOST and SanDisk Extreme 900 battled it out for the title of the fastest USB 3.1 Gen 2 SSD. USB is still the dominant interface for portable storage, but Thunderbolt will gain market share over the coming years. The TEKQ Rapide isn't the first new Thunderbolt NVMe portable SSD we've tested. That honor goes to the Netstor NA611TB3 enclosure that we tested with two Samsung 960 Pro 1TB SSDs earlier in 2018. The NA611TB3 enclosure requires external power, which makes its portability questionable.

The only hard disk drive in the review comes from LaCie. The Rugged RAID is the only portable disk-based solution we've tested that can compete with these flash drives. Its performance comes from a pair or HDDs running in RAID 0 that provide enough grunt to run sequential workloads faster than you might think possible.

We pulled in a handful of our other favorite portable SSDs, including the Adata SD700, Samsung T3, Samsung T5, and the SanDisk Extreme 900 Portable. The MyDigitalSSD BOOST is the fastest in the USB group because it comes from the factory with two OEM-grade Samsung mSATA SSDs.

The write test shows us a smooth transition with the TEKQ Rapide as we move up to larger blocks, but the drive has lower read performance than we expected with 64KB blocks.

These tests read and write to the entire usable space of the drive with 128KB sequential data. These tests show us what it would be like to copy one large file to the drive. It also exposes possible performance degradation as the drive fills. An HDD-based storage device like the LaCie Rugged RAID slows as the drives move from fast outer tracks to the slower inner tracks.

SSDs can slow down as you put more data on the drive, but the condition doesn’t impact sequential performance as much as it does random data.

The TEKQ Rapide is the fastest portable storage device we've ever tested. The drive is even faster than the NetStor NA611TB3 loaded with a single Samsung 960 Pro 1TB NVMe SSD. This may not change the world, but it will change the amount of equipment some A/V professionals take with them on location.

We don't run many application tests on external or portable storage products because the typical workload is sequential in nature. Most of us simply read and write large pieces of data for archiving or transferring data from one location to another.

We often see performance measured in throughput, but time-based results are easier to interpret because the sense of time is universal. We tested transfer performance with a Blu-ray ISO. For the Game test, we used rFactor to transfer data from the post-installation directory to the portable drives. The Directory Test is a 15.2GB block of data that contains a mix of images, software installations, ISO files, and multimedia.

The NVMe protocol was designed to streamline high-speed storage by reducing latency. Thunderbolt wasn't made for NVMe specifically, or vice versa, but the two complement each other very well.

Our real-world transfer tests show us how the marriage of these high-speed technologies works. The two best results in each of the tests are with drives that leverage both Thunderbolt 3 and NVMe. The TEKQ Rapide outperforms every other product with ease. In each test, the Rapide takes roughly half the time to transfer the file than the leading USB 3.x drive.

We've talked about Thunderbolt 3 NVMe storage devices coming to market for the last six months. Intel lifted the Thunderbolt licensing fees and encouraged third-party IC makers to develop new chips that support the technology. That's led to an explosion in development, but it's just the first phase. Over the coming year, we will see more new desktops and notebooks support Thunderbolt as the technology spreads beyond high-performance systems and professional workstations.

The TEKQ joins just three other products on the market with this magical combination. The Sonnet Technology Fusion Thunderbolt 3 PCIe Flash Drive only ships in a 1TB model and costs $1000.00. It is physically larger than the Rapide. Other World Computing (OWC) also has two portable NVMe models with the interface: the $600 1TB Envoy Pro EX and the $980 1TB Envoy Pro EX VE.

The TEKQ is one of the early Thunderbolt 3 storage products, but it will be awhile before we see broad uptake of the interface. At CES 2018 we saw several NVMe-based storage announcements from companies like Lenovo, HP, and Dell. Eventually, Thunderbolt juggernauts LaCie (now part of Seagate) and G-Technology (A Western Digital Company) will also march into this segment. None of these companies have an interest in reducing Thunderbolt 3 NVMe portable SSD pricing, so it will be expensive until companies like Adata enter the market. Bare enclosures will also help when they come for the DIY crowd.

The TEKQ differs from other Thunderbolt 3 SSDs due to its superior 15nm MLC flash. The company's partner made a large strategic purchase of Toshiba 15nm MLC flash. Most 64-layer TLC flash has a difficult time keeping pace with the older planar MLC flash during write workloads. The two technologies are comparable in high-capacity drives, but MLC still has an advantage in low capacity models.

The TEKQ Rapide is the fastest portable storage device money can buy. The design is beautiful, and the prices are acceptable, but there are a few things to point out. The drive ships formatted with the exFAT filesystem. The file system ensures cross-platform compatibility, but it doesn't support TRIM in Windows. You need to format the drive to NTFS to take advantage of TRIM, but you will lose compatibility with Apple PCs.

The enclosure can get more than a little warm under heavy use. It won't start a fire, but you shouldn't put it in your pocket right after transferring several gigabytes of data to the drive. The good news is the case does exactly what it was designed to do, which is to act as a large heatsink.