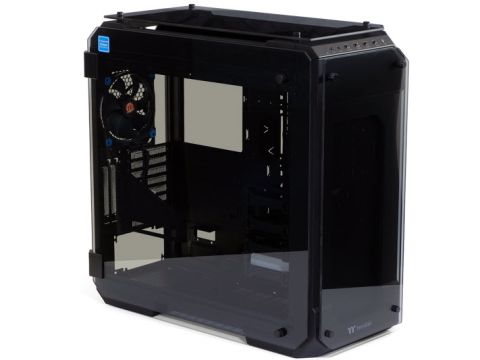 Something amazing happened while testing the View 71 TG: It kept our system cool. This in spite of its single intake and single exhaust fan. This in spite of allowing 12 hours for all that glass to heat up. Perhaps Thermaltake’s fans are just that good, or perhaps the design fits our CPU cooler just that well, or perhaps Thermaltake found a better way to get air into and out of the case. This isn’t even about size or fan count, as the smallest case was second coolest, and the one with the most fans was second hottest.

The View 71 TG wasn’t just the coolest, it was also second noisiest of the five comparison models. The Crystal 570X was the odd case out, being both second hottest and noisiest of glass-paneled cases marketed towards high-end gaming enthusiasts.

I can’t make sense of it, but the largest and smallest cases in today’s test took first and second place in cooling-to-noise ratio. The only sound-deadened case took third.

The View 71 TG beats the entire field of competing cases, if only because launch-day price cuts made it the cheapest of these. Yet even the RGB version, which costs $30 more, would have beaten the aesthetically-similar Crystal 570X, Customers of this style of case tend to have very specific ideas concerning aesthetics.

That is to say, if Thermaltake wants its View 71 TG to win the race for market share, it needs to draw customers away from the Crystal 570X. That could have been difficult, considering all the additional stuff the Crystal 570X gave us: extra fans, RGB control, dust filters that are far easier to remove and install, and a power supply shroud to help us hide cables. It was also manufactured to a higher quality standard—we had trouble getting the View 71’s top panel glass back on after pulling it to remove the protective plastic film, because of locator pin misalignment. Several of the holes that held its glass screws were improperly threaded, and one was even drilled crooked. There is no rational explanation we can think of for the View 71 TG to cost more than the Crystal 570X.

At least those aren’t critical defects, in spite of our need to call them out for criticism.

Yet the View 71 TG outperformed the Crystal 570X by such a large margin that we can no longer suggest buyers even consider purchasing that case. If you’re looking for a reason to discount the value of the 570X’s included fans, you can probably pick an RGB-fan liquid cooler and tell yourself you didn’t need the stock fans. Tricking yourself could be worthwhile given the performance treat.

And then there’s the one killer feature that only the Dark Base Pro 900 shared with the View 71 TG: an eighth slot. It doesn’t cost much to add an eighth slot to a case, so we wouldn’t expect the price difference to be large, yet the worth of that slot becomes enormous to anyone seeking to put a graphics card in the bottom slot of their motherboard. Back when 4-way SLI was worthwhile for certain games and many 3-way SLI motherboards used the bottom slot for a third card, I considered this to be the qualifying feature separating true enthusiast gaming cases from the lookalikes. While I can’t completely justify the View 71 TG’s price based on its features and quality, I can at least point to the Dark Base Pro 900 as being the more expensive alternative.

Every time I test a product I look for reasons to give it an award for value or features superiority. The View 71 TG can’t get either of those because of small manufacturing defects and a minor deficit in features-to-price. On the other hand, the View 71 TG managed to outperform its competitors, and that’s at least worth our stamp of approval.