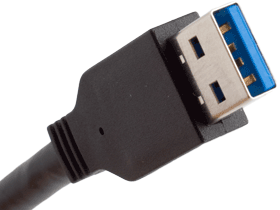 Most days, we treasure the utility, convenience, and instant connectivity of USB. But sometimes we curse the interface's very existence. USB's plug and play nature makes it incredibly easy to use. Sometimes, though, it almost malevolently refuses to recognize an attached device or transfer data at the speed we expect.

With Intel's 7-series chipsets and AMD's Fusion Controller Hubs now featuring native USB 3.0 support, it is difficult to imagine how we ever tolerated the first generation of USB more than a decade ago. With a maximum throughput of 1.5 MB/s, file transfers over USB 1.1 were frustratingly slow, though that was at least partially mitigated by the small-capacity memory sticks available back then.

Fast-forward a few years to the introduction of USB 2.0, which hit the market with an advertised maximum bandwidth of 60 MB/s—an enormous leap over USB 1.1. Saddled with protocol overhead and 8b/10b signaling, however, USB 2.0 was actually capped somewhere in the 30-40 MB/s range. That was good enough for a while. But we get desensitized to great performance, so, as affordable external RAID enclosures and SATA-based SSDs became more popular, it became painfully obvious that USB 2.0 was holding us up.

Enter USB 3.0, fulfilling our demand for a faster data interface with a blistering maximum throughput of 625 MB/s. After factoring in signaling, you're looking at a 500 MB/s ceiling. Even then, though, real-world performance never seems to get as high as those overly optimistic bandwidth charts so prominently featured by motherboard vendors on the front of their boxes.

Based on the performance of the thumb drives and external hard drives lying around our SoCal lab, we were worried that we weren't getting anywhere near the interface's potential. So, we set out to explore the state of USB 3.0 and figure out if there was any way to improve our USB 3.0 transfer speeds.

Next Page So, What Makes USB 3.0 Slower Than We Expect?
52 Comments Comment from the forums
Be In the Know