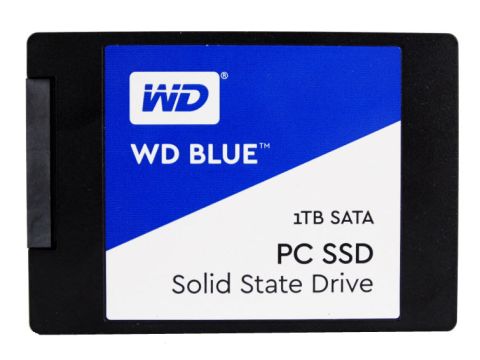 The Western Digital Blue shows us that old storage companies have a hard time evolving from their old ways. The Blue 1TB SSD delivers increased performance over many mainstream SSDs, but it still doesn’t match every virtue of the 850 EVO. Priced at $299, the Blue 1TB SSD doesn’t add to or change the current landscape of the SSD market. The Blue is just another irrelevant product that sits in the middle while we search for a low-cost or Samsung mainstream SSD.

UPDATE 10/11/2016 8:40 AM PST - WD provided us with an incorrect MSRP prior to the launch date. Products under NDA are not listed at retailers, therefore we could not verify the information given to us. We corrected the article and altered the conclusion.

WD's new Blue series represents its first consumer SSD using technology from the SanDisk acquisition. Western Digital started making flash technology purchases even before 2016, but most of its acquisitions were enterprise-focused. When WD acquired SanDisk last year, it almost instantly put the company in second place behind Samsung in the SSD market.

WD armed itself with vast flash resources in the form of SanDisk’s fabs and industry-leading patent war chest, and now it is working to bring high-volume mainstream SSDs to the consumer market. Easy street hasn't been cheap, but acquiring a turnkey consumer SSD manufacturer like SanDisk goes a long way to smoothing out the bumps in the road.

Western Digital made a half-hearted attempt to enter the SSD market in 2010 with the Silicon Edge Blue. The $999 (256GB) SE Blue suffered from JMicron disease, so the company didn't find much success. At the time, Western Digital didn't know a lot about solid-state technology. WD purchased SiliconSystems Inc. who, as it turned out, didn't know a whole lot about building consumer SSDs, either.

"1% products" like the Western Digital Raptor series are not big sellers. These products are great for enthusiasts, but not for the boardroom. Even though everyone we know used a Raptor product at some point, Western Digital didn't sell that many compared to the mainstream product SKUs. The regular SKUs outsold the Raptor hundreds to one. SSDs fell into that same 1% group for nearly a decade, so HDD vendors ignored the technology. Hard disk drive shipments are down 20% in the first quarter of 2016, and the HDD manufacturers can’t ignore flash-based technology any longer. Luckily, WD purchased several flash technology assets to get on the right track.

The new WD Blue series comes to the forefront today, but a new, lower-cost Green series also tags along. The Green SSD will not ship until later this year, so we will have to wait for a product review.

The new Western Digital Blue series SSDs come to market in three capacities that range from 1TB to 250GB. The Blue's hardware is identical to the SanDisk X400 we recently tested, and it ships in both 2.5" and M.2 2280 (AHCI SATA) flavors. Western Digital tells us that it changed the firmware, but we don't have many details.

The client-focused X400 crossed over to the mainstream market due to the vacuum created when SSD manufacturers attacked the entry-level segment and ignored the mid-tier. The Blue SSDs sport slightly higher performance and endurance compared to the X400. The Blue peaks at 545 MB/s sequential read and 525 MB/s of sequential write speed, while random performance tips the scales at 100,000/80,000 read/write IOPS. The two high-capacity models offer the best performance, but the 250GB only trails by a small amount.

The Western Digital Blue series is available now. The drives should sell at MSRP at first and then decline over time. The 500GB model represents the best value at $139.99. Surprisingly, the 1TB option we are testing today costs more than twice as much at $299.99.

All three capacities ship with a 3-year warranty that WD limited with a terabytes written (TBW) endurance rating. The TBW rating serves as a basic guideline for the amount of data you can write to the SSD before the warranty expires. The Blue offers increased endurance compared to the X400; the 1TB Blue sports a 400TBW rating while the comparable X400 shipped with a 320TBW rating. The Blue 500GB offers 200TBW, and the 250GB provides 100TBW of endurance.

Our Blue SSD didn't ship with any paperwork. Inside the package, we found the drive and a plastic container to keep it stationary during shipping. Users can download a Western Digital-themed version of SanDisk's SSD Dashboard software that works exclusively with the new SSDs.

Just like SanDisk's version, the software will not allow users to perform secure erase or sanitize operations inside Windows 8 or newer operating systems. You can use the software to create a bootable thumb drive that cleans the drive outside of Windows.

Western Digital's new SSDs come with an attractive design, but the company didn't provide a lot of detail about the product. The SSD toes the company line with the blue color scheme it uses to identify WD's mainstream PC products. It shouldn't surprise anyone that the company known for manufacturing hard disk drives promotes a dual-drive SSD/HDD configuration on the package (with the HDD presumably used for long term data storage). Dual drive configurations are for more advanced users, so we don't think many mainstream users will investigate the "ideal" configuration. In either case, most web browsers and family photos don't require a lot of storage.

The hardware is identical to the X400 other than a sticker change. The thin plastic housing is far from a premium design, but it works well for both desktop and consumer use. The Marvell 88SS1074 controller doesn't produce a lot of heat, so it will thrive in the insulated environment. Western Digital uses a full-size thermal pad to spread heat from the components to the thin plastic cover.

Western Digital only sent us the Blue 1TB for testing. This drive utilizes eight SanDisk 15nm TLC NAND packages on one side of the printed circuit board. WD placed two LPDDR3 DRAM packages, which are used to cache the data map, adjacent to the Marvell 4-channel controller.