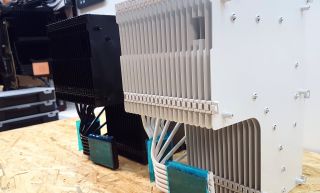 MonsterLabo is a four-person team that began designing a case and cooling system called “The First” back in February 2018. As spotted by FanlessTech, the startup is now also selling the passive “The Heart” cooler that’s otherwise built into “The First” as a standalone cooler. As wicked as it is, it won’t be a piece of cake to install it in your system for one simple reason: The cooler measures almost a foot tall and weighs almost 7 pounds.

To be precise, it weighs in at 6.6 lbs and has a footprint of 200 by 185 mm. The cooler towers 265 mm tall, making it the world’s largest CPU cooler to fit in a consumer PC. However, not only is it a CPU cooler, it is also a GPU cooler. The unit crawls around the entire graphics card with heatpipes to cool the GPU.

As expected for such a design, installation won’t be possible in most cases (pun not intended). Compatibility with GPUs is also bound to be quite limited, relying on coincidentally having the GPU located on the graphics card exactly where the contact surface is. Sadly, MonsterLabo doesn’t give any information about compatibility, nor about the unit’s thermal dissipation power. It does specify the cooling power for The First, which is rated at a max 100W CPU load and a 120W GPU. Adding a 500-RPM 140mm fan would bump those numbers to 140 W and 160 W, respectively. We reckon the numbers would be similar if you used the cooler in another case.

The Heart is available in black and white, and costs €180 euros, which translates to about $200 USD. The real catch here is that you really have to be aware of what you’re getting into if you want one of these.