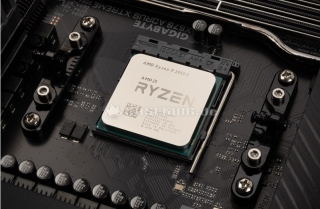 AMD's Ryzen 3000-series CPUs are based on a chiplet design, which means that there is one central I/O die with the CPU core dies placed next to it. Because of this, the heat doesn't come from the central spot on the heat spreader anymore, and for a long time there have been discussions on whether cooler placement and orientation matters. Some parties say it does matter, but others, such as Noctua, say it doesn't (at least on their coolers). Overclocker Der8auer, from Germany, does believe that cooler placement matters, particularly for AIOs that don't provide full coverage. With that in mind, he built a new set of mounting brackets that solve the problem.

The principle idea behind the brackets is that they allow you to adjust the placement of the liquid cooler's cold plate, as they're often round or too small to cover the entire CPU's heatspreader. By adjusting it, you'll be able to place the central part of the cold plate closer to the hot spot generated by the CPUs I/O and core dies.

In his testing, Der8auer found that optimizing the placement can yield temperatures up to 7C lower than the standard placement. Of course, we would have to test this for ourselves to see if indeed it makes that big a difference. If it does, it's a pretty neat way to improve temperatures on Ryzen 3000 CPUs without delidding, which is quite difficult due to the dies lying below the height of the AM4 socket's mounting mechanism.

Der8auer tested the brackets on roughly 30 different AMD X570 motherboards with a handful of coolers and built up a compatibility list with the information. The overclocker has also compiled a list of exactly which deviations you should maintain in the X and Y axis to achieve optimal results, depending on which CPU you're using.