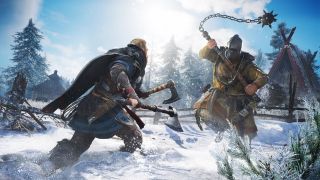 There's nothing quite like a good game bundle, and although we like low hardware prices better than bundles, when the new CPU you buy comes with a game you care for it's all the sweeter. The latest rumor has AMD packing Assassin's Creed Valhalla as its upcoming promotion, as reported by VideoCardz.

The publication doesn't state a source for the information, but the info slide looks legit. The promotion is said to kick off on July 7th when the new XT-series CPUs will launch, but that doesn't mean the game will be out by then -- you'll likely just receive a code to claim it when it does hit shelves.

However, this information goes against earlier reports that AMD would be bundling the Playstation-exclusive Horizon Zero Dawn, which is currently being ported to PC. Considering that images of Horizon Zero Dawn are listed on AMD's front page, we somehow feel that deal will be more likely.

Nevertheless, the only way to know for sure is to sit tight and wait for more information to reveal itself -- who knows we'll be getting both promotions, with Horizon Zero Dawn across the majority of the lineup including notebooks, and Assassin's Creed Valhalla as an extra deal-sweetener on high-end CPUs.