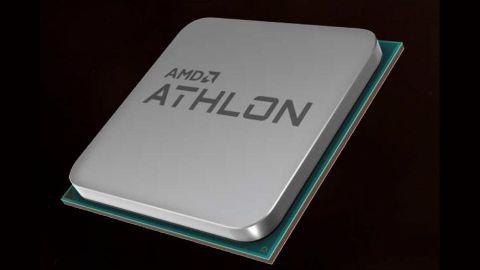 AMD's Athlon line-up dominates the low-end for gaming on integrated graphics, and the low price points undercut competing Intel Pentium processors. The addition of unofficial overclocking sweetens the deal, and similar host and graphics processing resources on all three models levels the playing field after tuning, meaning you can score the cheapest model and enjoy the same performance as the most expensive Athlon.

AMD is slowly stealing market share from Intel as the chip-making giant struggles with an ongoing shortage of 14nm processors. Intel, focused on maximizing profits during this period of limited production capacity, is prioritizing high-margin Xeons and enthusiast CPUs, leading to availability issues and price gouging in its low-end Pentium line-up.

It's especially timely, then, that AMD recently dusted off its 20-year-old Athlon brand to attack the sub-$100 market with capable Zen cores paired with Radeon Vega 3 graphics. Its onslaught began with the Athlon 200GE, which demonstrates exceptional value at its $55 price point. And now AMD is fleshing out the Athlon family with a $65 Athlon 220GE and $75 Athlon 240GE. Both processors slot in nicely between the $100 Ryzen 3 2200G and $55 Athlon 200GE.

The two new chips employ a dual-core/quad-thread design paired with a 192-shader Radeon Vega 3 graphics engine. They're meant to employ locked ratio multipliers, preventing overclocking and giving enthusiasts a reason to spend more for higher clock rates on the pricier models. However, motherboard manufacturers developed firmware to circumvent this, albeit in a limited fashion, across the Athlon portfolio. Officially, AMD maintains that Athlons are locked processors and points to motherboard manufacturers for answers on policy changes. So, for now, overclocking Athlon CPUs is game-on. Better still, these ultra-affordable chips come bundled with a solid thermal solution that can handle the extra heat of overclocking, increasing their value.

Ultimately, an unofficial unlocked multiplier serves as the equalizer between all three Athlons. You can purchase the cheapest model and gain access to similar performance as the most expensive model, but at a $20 savings.

The 2C/4T Athlons drop into Socket AM4 motherboards. Their Radeon Vega-based graphics engine is composed of three Compute Units (CUs), serving up a modest 192 Stream processors, 12 TMUs, and four ROPs. Across all three models, the Vega 3 component operates at 1000 MHz. Thus, slightly higher CPU frequencies (3.4 and 3.5 GHz) are the only reason to buy a pricier Athlon 220GE or 240GE. Like the competing Pentium chips, Athlon processors do not run at higher clock rates via boosting algorithms.

The three Athlons come with eight PCIe 3.0 lanes dedicated to expansion slots instead of the 16 lanes found on fully-featured Ryzen models. The missing eight lanes aren't much of a concern due to a focus on integrated graphics. Moreover, the reduced bandwidth should have a negligible effect on most add-in cards, especially since Athlon-based systems are bound to host low-end discrete GPUs, at most.

Even though it is possible to overclock the Athlon's host processing cores, the graphics engine and memory remain locked. It is important to remember that AMD's warranty doesn't cover overclocking-related damage on any of its processors. We're sure that limitation is even more strictly enforced on CPUs like the Athlon, since it's officially multiplier-locked.

The 35W Athlon processors are a natural fit for entry-level Socket AM4 motherboards with the A320 chipset. These sell for as little as $50, and they offer the flexibility to upgrade to a faster Ryzen CPU in the future. You also get the benefit of USB 3.1 Gen 2 and NVMe support (though features vary by board).

The 14nm Athlon processors feature the same underlying design as AMD's Ryzen 3 2200G and 2400G processors, albeit with a pared-down feature set that allows the company to offload Raven Ridge dies that suffered defects during manufacturing. Similar to the aforementioned Ryzen 3s, the Athlon processors all come with 4MB of L3 cache. They also support the AVX instruction set, which is a notable advantage over Intel's Pentium and Celeron line-up.

It's no surprise that the new Athlons aren't performance-oriented processors. Instead, AMD says they're ideal for basic computing tasks like Web browsing, word processing, and low-end gaming. The idea here is that you don't need to pair the Athlon 200GE with a discrete graphics card. The three Vega CUs, with 64 Stream processors each, come together in a very entry-level configuration. The Ryzen 3 2200G's eight CUs are far more capable. But AMD says the Athlons should still muster playable frame rates at 720p in eSports games. The experience it enables is helped along by FreeSync support, so long as you own a compatible monitor.

Next Page Overclocking and Test Setup
Be In the Know