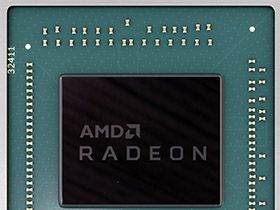 The centrifugal fans on AMD’s Radeon RX 5700 and 5700 XT are configured to behave similarly…at first.

Both of our cards start in the 700 RPM range and aggressively ramp up to about 2,100 RPM. The Radeon RX 5700 XT holds that rotational speed through our three-run Metro benchmark. But the Radeon RX 5700 starts dialing back its fan around the time the first loop ends. It never recovers. Instead, the 5700 spikes and dips through the rest of our test, ending in the 1,800 RPM range. This data was reported to AMD prior to launch and company representatives responded that they were investigating.

AMD does appear to have put serious effort into quieting its reference cooler down. Whereas the first Radeon RX Vega cards we reviewed were offensively loud, these are much more refined. That’s good news for us. We have a special affinity for coolers that exhaust their waste heat and can consequently be used in small form factor cases. While Nvidia’s current-generation Founders Edition boards are even quieter, their axial fans kick waste heat back into your chassis.

Because of the fan speed fall-off, Radeon RX 5700’s temperature continues rising through the end of our benchmark sequence. The reading reported by AMD’s driver doesn’t quite reach 80°C.

Radeon RX 5700 XT, on the other hand, gets quite a bit warmer. AMD says Navi has a maximum junction temperature of 110°C, so we must imagine that throttling would happen many degrees below that point.

As a quick refresher, the maximum junction temperature corresponds to the hottest of AMD’s many on-die sensors. It’s not uncommon for that reading to be 10 degrees C warmer than the temperature reported by the graphics driver. So when we observe measurements in the 80° range, we’re typically looking at junction temperatures in the 90s.

While we did see some highly variable frequency behavior through Metro, it didn’t appear to be temperature-imposed throttling.

The Radeon RX 5700’s GPU clock rate does sag slightly through our three-loop run of Metro, starting in the 1,700 MHz range and dropping to 1,650 MHz or thereabouts. When we compare those numbers to AMD’s specifications, it looks like the Boost clock is an optimistic estimate when the GPU is cold. As it warms up, the Game clock is more realistic.

Radeon RX 5700 XT peaks around 2.05 GHz before settling in around 1.8 GHz. Again, the Boost frequency is short-lived; you’re more likely to see a clock rate around or slightly higher than the Game rating.

The fan behavior observed under Metro carries over to FurMark. Radeon RX 5700 XT hovers around the same 2,100 RPM, while Radeon RX 5700 takes a strange hit that sees it end our test sequence right above 1,600 RPM. AMD took a look at our findings and responded with the following:

“Synthetic power virus-type workloads such as FurMark (among others) are not representative of typical gaming uses cases, which is what the RX 5700-series GPUs are built for. The GPU (and its collection of sensors, controllers and associated algorithms) does whatever is necessary to maintain the part within thermal, electrical and other design specifications. We’re working with the team to see if something should be done about this absolute corner case, without compromising gaming performance in any way.”

While this explanation would seem to make sense for a GPU already operating near thresholds imposed for safe operating conditions, it doesn’t consider that we’re seeing the same behavior under Metro, a typical gaming use case. Instead, we might hypothesize that AMD’s fan reacts quickly to a spike in utilization/temperature and quickly spins up, but then relaxes as the rate of temperature change becomes less severe. If that’s the case, though, we’re not entirely sure why the 5700 would spin down under FurMark, a workload AMD itself describes as a power virus.

The point at which Radeon RX 5700’s fan slows itself down is clearly reflected in our chart of temperature over time. Measurements in the 75 degrees C range ramp up to 82 degrees C by the end of 15 minutes, surpassing the already-hot Radeon VII.

But that’s nothing compared to Radeon RX 5700 XT, which tops out at 89 degrees C in our chart (and continues to get hotter as the test progresses). Junction temperatures in excess of 100 degrees C through this worst-case scenario might seem worrying but are actually lower than what we’ve seen from Radeon VII.

It’s difficult to see the Radeon RX 5700 XT’s line chart behind AMD’s own Radeon VII. However, it starts at 1,650 MHz and, over the course of our test sequence, drops to 1,575 MHz or so. This is lower than AMD’s 1,605 MHz base GPU clock for anyone keeping score.

Prev Page Power Consumption: Radeon RX 5700 XT Next Page Conclusion
41 Comments Comment from the forums
Be In the Know