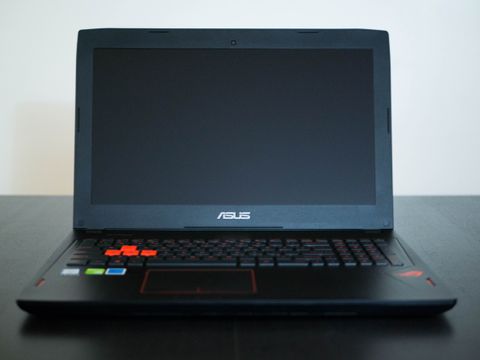 We were blown away by the performance and features that Asus infused into the 15.6" Strix GL502VM-DB71. The company managed to cram an Intel Core i7-6700HQ processor, 16GB of memory, an Nvidia GeForce GTX 1060 6GB graphics module, and G-Sync variable refresh rate technology into a sleek VR-ready gaming laptop for under $1,400. It’s one of the best-performing GTX 1060-equipped machines we’ve tested, and few vendors can match the uncompromised specifications of the GL502VM at an entry level.

The Strix GL502VM-DB71 is Asus's entry-level VR-Ready gaming laptop. The 15" Strix features a speedy Intel Core i7 processor and an Nvidia GeForce GTX 1060 under the hood. It also sports a G-Sync display, and starting at $1,399, it could be an ideal balance of price and features for enthusiast gamers. Does the Strix GL502VM live up to the hype?

The Strix GL502VM's chassis stands out among the other laptops at this price point, with familiar ROG red accents and LEDs adorning the lid. The pads in each corner on the bottom of the case are orange, along with the text on the key caps and ROG symbol. The WASD keys, often used by gamers, are also highlighted and completely orange. The angular design is sleek, and the plastic chassis lends to the Strix's light weight and thin profile.

The hinge is sturdy despite the lightweight construction, and it remains in place when we lightly shake the Strix. The two speakers, which appear in the form of two orange slits on either side of the chassis near the hinge, are barely visible. The sound quality is par for a gaming laptop (meh), but at least the speakers look cool.

The left side of the Strix sports a USB 3.0 port, an RJ45 LAN connection, a mini DisplayPort 1.2, and an HDMI 1.4 interface. The USB 3.1 Type-C port also resides here, and it's capable of 10Gb/s data rates. However, the Type-C port lacks Thunderbolt 3 (40Gb/s) and can't act as a display output. The right side features two USB 3.0 ports, a 3-in-1 card reader, and the audio in/out combo jack.

The Asus Strix GL502VM-DB71 features a 15.6" 1920 x 1080 anti-glare display with a 60Hz refresh rate and Nvidia G-Sync onboard, further adding to the value of the laptop. The resolution and refresh rate are ideal for the GTX 1060's performance, and G-Sync ensures a smooth experience even if you push the GPU under 60 FPS. The top of the display houses a 1.2 MP 720p webcam, in addition to array microphones designed to filter out ambient noise.

The red LED-backlit keyboard features anti-ghosting scissor-switch keys, which sport a 1.6mm travel distance and 30-key rollover limit. It's comfortable to type on, and the WASD keys are highlighted with all-orange caps.

The touchpad also features an orange trim, which is used to visually separate the left and right touchpad buttons. However, if you are watching the screen, it's rather bothersome to quickly left click on the fly without a way to feel out where the left button ends and the right begins, and I often found myself hitting the right button instead. As usual, we recommend a mouse if you intend to game on the Strix GL502VM.

The Strix GL502VM's bottom panel is secured to the chassis with 10 screws. You might need a thin object such as a credit card to help pry the bottom panel off. Inside, you'll find the laptop's cooling system, which consists of two large heat pipes that make contact with the GPU and GPU heat sink. Two fans expel air from the orange heat fins in the back. There's a lone SO-DIMM memory slot in the middle, occupied by 8GB of DDR4-2133; the other 8GB is on board the Strix itself. To the left is an empty M.2 SSD slot (supporting SATA and PCIe NVMe SSDs), and on the top right is the 2.5mm HDD slot. The 15.2V 64Wh battery is located on the top.

Asus's ROG Gaming Center Software comes standard in all of the company's gaming laptops, and the Strix GL502VM is no exception. From here, users can create and select different gaming profiles. There's also GameFirst IV, which optimizes network traffic. The Application tab monitors the network traffic imposed by each app; you can sort applications by name, priority, download, and upload speed. The Network Monitor displays metrics such as overall bandwidth usage and the signal strength of nearby Wi-Fi channels. Finally, the Network Information provides a general overview of the system's network interfaces.