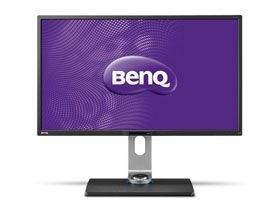 At first glance, it looks like the BL3201PT doesn't quite meet its claimed 350cd/m2 spec. The results above are what you get from the Standard picture mode. However, in Presentation mode, output peaks at 367.4915cd/m2. The only drawback to that mode is overall contrast is around 22 percent lower. Our preferred selection is Standard unless you really need the extra brightness in an outdoor application.

The maximum black level is average for this group (and for IPS monitors in general). The best blacks come from the VA (Vertical Alignment) panel in BenQ’s BL3200PT. Combine that technology with Ultra HD and you’ll have a display that’s really hard to beat in the contrast department.

Compared to other 32-inch Ultra HD screens, the BL3201PT’s contrast is in the middle. Dell manages to squeeze a slightly better black level from its UP3214Q, hence its better result. But the BenQ beats all of its IGZO-based competition on price.

Dropping the brightness control to zero nets an almost perfect (in our opinion) 56.5421cd/m2 peak white level. This is a great way to use the monitor in total darkness for movie-watching or game-playing.

Black levels are quite good for all of this group's screens. The Monoprice is a little brighter overall because its backlight doesn’t go as low. Of course, the BL3200PT is in another league altogether. Remember that the UP3214Q has a dimmer backlight and therefore a lower black level.

Minimum contrast is only a tick lower than the maximum number. Nearly every monitor we test these days shows consistent contrast at all backlight settings. That means once you calibrate, you can set the brightness to taste without compromising other image parameters like color or gamma.

The calibrated black level remains mid-pack in our comparison. It’s fair to say that IPS and IGZO are roughly equal in their black-rendering and contrast performance.

Calibration doesn’t affect overall contrast by a visible amount. The slight drop observed is due to us lowering the Contrast control by four clicks. This is done to improve the white balance at 100-percent brightness. You can return it to its default setting for a little more punch, but peak whites will look a little greenish.

As you’ll see on page seven, the BL3201PT has just average screen uniformity. This affects the ANSI result negatively by dropping it around 11 percent from the calibrated on/off number, though some samples might measure better than others.

Prev Page OSD Setup And Calibration Next Page Results: Grayscale Tracking And Gamma Response
19 Comments Comment from the forums
Be In the Know