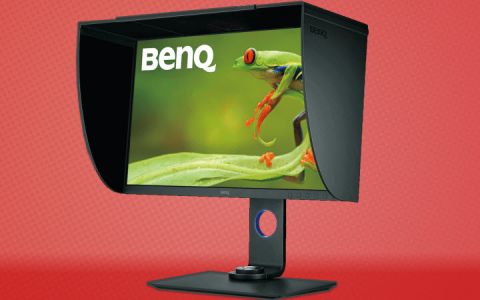 Choosing one of the SW271’s color presets reduces calibration options. We could still pick from fixed color temps and gamma curves, but the RGB sliders were locked out. We opted for the two Custom memories where we created calibrations for DCI-P3 and sRGB.

The first three charts show results for Adobe RGB, DCI-P3 and sRGB modes. BenQ’s default DCI-P3 mode conforms to the film version (DCI 1.2), which has a greenish cast. This is meant to offset the color temperature of the xenon bulbs used in large commercial projectors, which are deficient in green. If you want a DCI preset with D65 white, you’ll need to create it yourself. Our chart takes this into account, which is why it looks the same as the others. In general, the fixed modes were a bit green at the higher brightness steps. Out-of-box grayscale accuracy is the SW271’s one weakness.

Fortunately, fixing it required just 30 seconds with the RGB sliders. The last two charts are among the best results we’ve ever captured and why we consider the SW271 reference-level. When properly set up, it can be used to dial in color meters, pattern generators, or other measurement equipment. It truly doesn’t get better than this.

An average default grayscale error of 3.12dE would be fine in any other category, but for a professional display this is pretty low.

Thanks to BenQ’s super-precise OSD, we achieved averages of just .52dE and .56dE for DCI and sRGB, respectively. This monitor is as close to perfect as we can imagine. Our only complaint is the lack of a third custom memory for OSD calibration. If we had that, we could add Adobe RGB to the list of perfectly adjusted modes. To create three custom modes, you’d have to use Palette Master Element for at least one of them.

All the SW271’s gamma presets delivered exactly what they say they will. We changed the gamma in the fixed color modes and in the custom memories. For Adobe RGB and sRGB, we specified 2.2. That value remained constant and accurate both before and after calibration. For DCI, the default is 2.6, which is correct for film material. We chose a more display-friendly 2.4 for our custom setup. Regardless, there was a tiny dip at 10 percent, but the rest of the brightness range was perfectly on-target.

The SW271’s range of gamma values was spoiled by that 10 percent brightness number. If it were higher, BenQ easily would’ve won this comparison.

It did, however, take first place in the deviation category with an average of 2.19. Precision like this maximizes perceived contrast but, more importantly, ensures perfect color saturation and luminance throughout the gamut triangle. We’ll show you those results now.

For details on our color gamut testing and volume calculations, click here.

The color gamut and luminance charts are almost boring in their near-perfection. Our calibration only affected grayscale tracking and just slightly. Color was exemplary regardless of mode. You can see in the second graph that the default DCI-P3 preset features a green white point, which is intentional.

The calibrated chart shows our change to D65. Luminance charts were perfectly neutral with no colors more than a hair above or below the line. Whether working on photos in Adobe RGB, or video content in DCI and sRGB, we saw perfect color every time. The SW271 delivered the most accurate post-calibration color we’ve ever measured.

We looked through our database for monitors that have an average color under 1dE. There have been only a tiny handful: BenQ’s SW2700PT, which is being replaced by the SW271, and a couple of NECs, the PA243W and the older PA272W. This, again, gives the SW271 the honorable title of reference monitor. While the difference between 1dE and 2dE is theoretically invisible, getting that number under one requires supreme attention to detail and precise tuning during production, making for a professional’s tool rather than just another display.

Our gamut volume chart shows values for Adobe RGB, DCI-P3 and sRGB color. The SW271 showed the largest Adobe RGB volume and second largest volume for sRGB. In the DCI race, it came in a close fourth. Until we’re able to buy Rec.2020 displays, there won’t be many monitors with this level of performance. As you can see from all our test results, color-critical work is this monitor’s forte.

Prev Page Brightness & Contrast Next Page HDR Grayscale, EOTF & Color
10 Comments Comment from the forums
Be In the Know