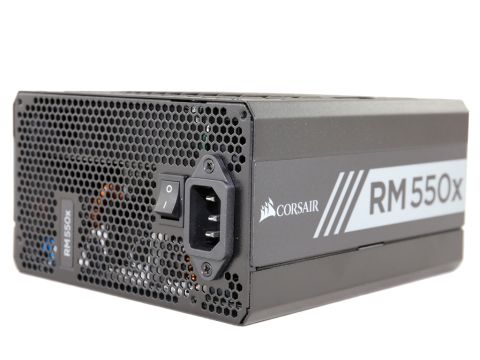 In addition to very high performance, Corsair's RM550x also features dead silent operation, even under extremely hard conditions. The only major downside of this PSU is its high price, compared to the competition in this wattage category.

Initially, Corsair decided to upgrade its RM line with the RMi family, consisting of high-performance power supplies featuring a digital interface for monitoring vital statistics and controlling the fan. Then Corsair realized that a more affordable version of the RMi models without the digital interface circuit and the FDB fan would be even more competitive.

That's how the RMx line was born. Currently, it includes five members with capacities ranging from 550W to 1kW. The entry-level model, the RM550x, is what we're reviewing today. According to Corsair, these RMx power supplies will replace the portfolio of RM PSUs.

All RMx members are made by Channel Well Technology (CWT) in cooperation with Corsair, and feature 80 PLUS Gold efficiency, fully modular cabling and a 135mm rifle bearing fan. Thanks to a "Zero RPM" mode (Corsair's marketing term for semi-passive operation), the fan doesn't spin under light and moderate loads. Only Japanese electrolytic and polymer capacitors are used in the RMx models, imbuing them with high reliability over time. As we know, a PSU's capacitors are immensely important, since they have a tremendous impact not also on performance but also on reliability. Chinese caps tend to age faster than Japanese ones due to the lower-quality electrolyte they use. In a PSU with sub-standard caps, performance will quickly deteriorate, especially under harsh conditions. That's why we only want to see high-quality caps in the PSUs we review, along with a capable fan able to remove heat from sensitive electronic components.

As mentioned, we're reviewing the RM550x today, and although it's the line's entry-level model, 550W is plenty for a potent gaming system equipped with a high-end graphics card. Taking into account that the RMi family doesn't have a 550W member, the RM550x is your only option if you want a high-end Corsair PSU at this capacity point.

In addition to its Gold-rated efficiency, the RM550x (along with the rest of the RMx family members), can deliver its full power continuously at up to 50 °C ambient. Corsair adds S6 and S7 sleep state compatibility, introduced with Intel's Haswell architecture, along with all of the protection features we look for (aside from over-current protection, since we're only dealing with a single +12V rail PSU). The fan uses a rifle bearing that should last quite a while, matching the lifetime of ball-bearing fans. It's helped along by the power supply's semi-passive feature.

The RM550x's physical dimensions are compact enough, and its weight is modest as well. Finally, Corsair's warranty is respectable at seven years. Only EVGA protects its high-end products with longer coverage.

The minor rails are capable enough for a 550W PSU and the single +12V rail can deliver almost 46A, so it will easily feed most high-end graphics cards. The 5VSB rail is stronger than usual, offering 3A of maximum current output.

For starters, all RMx units use Corsair's "Type 4" cables that feature capacitors on the ATX, EPS and PCIe leads to further suppress ripple. In addition, the ATX cable has four more wires that help maintain tight load regulation.

The number of available connectors is sufficient for a 550W PSU, although a couple more SATA connectors would be welcome. Cable length is satisfactory, and the distance between most connectors is enough to avoid compatibility problems. For the peripheral (four-pin Molex) connectors, we would like at least 15cm of distance, since the parts that use them are usually installed far from each other. Finally, the ATX, PCIe and EPS cables consist of the standard 18-gauge wires recommended by the ATX spec.

Next Page Packaging, Contents, Exterior And Cabling
36 Comments Comment from the forums
Be In the Know