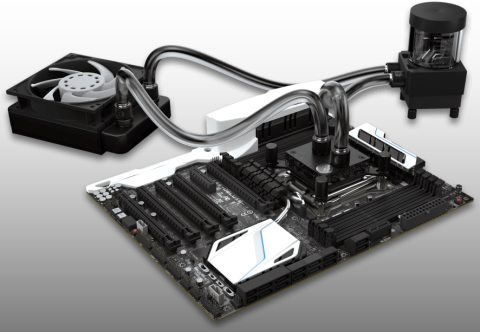 Engineered in aluminum (which reduces weight, but limits future expansion), the A120 kit features superb documentation and competitive pricing. It's a great base kit for liquid-cooling novices.

Rising in its field on the strength of its catalog of water blocks, EK has spread its influence into the broader PC-enthusiast cooling market by adding high-quality pumps, radiators, fans, and fittings to its lineup. That ever-expanding collection of parts has spawned an also-growing selection of watercooling kits, ranging from introductory-level to extreme-performance gear.

Of course, setting up liquid cooling isn't child's play. EK has paired that expansion into cooling kits with a thoughtful approach to the installation help that users will need. Meticulously detailed, step-by-step process guides at the EKWB.com website assist builders with everything from assembling an entire cooling loop from scratch to selecting a specific cooling component. The latter is important, in EKWB's case, because many of its products are custom-designed to fit your specific motherboard or GPU.

So, on to the kit at hand, and its curious construction.

Ask any liquid-cooling enthusiast to list the cardinal sins of building a custom cooling loop, and "galvanic corrosion" will sit, almost without a doubt, near the top of that list. This phenomenon occurs when dissimilar metals come into contact with one another in an environment that causes ionization. That leads to accelerated corrosion of the donor metal, and the build-up of deposits on the acceptor metal, which often winds up looking like something you found deep within a prehistoric cavern. The metals in question are almost always copper, nickel, brass, and aluminum. Aluminum is typically the donor metal, and thus is treated with caution. EK goes all-in with aluminum here, though.

EK makes clear the warnings of mixing metals via a bright yellow warning sticker affixed to the top of the CPU block itself--you can't miss it. Because a liquid-cooling kit might go on later to be expanded to include other components (such as a graphics card, an additional radiator, or both), aluminum watercooling components should be used for that additional gear, too.

EK has flipped the entire notion of using aluminum in a watercooling loop on its head, however, in the Fluid Gaming A120 Kit. Aluminum is the only metal that makes contact with liquid in the entire cooling-component build, from the Supremacy AX CPU block to the 120mm Alustream SE radiator. Even the supplied compression fittings are fully cast aluminum, to help forestall corrosion issues. Using aluminum confers the additional advantages that the overall kit is lighter than its copper-based cousins, and pricing is more affordable.

The A120 kit supports just a handful of current CPU sockets. Intel's socket 115x versions and 2011/2066 make the cut, but only AMD AM4 has mounting hardware provided.

The instruction manual is among the most detailed and user-friendliest we've seen. With liquid-cooling beginners in mind, EK's included documentation certainly impresses.

The Supremacy AX CPU block originates as a hunk of pure, cast aluminum, milled satin-smooth with a bi-directional orbital finish over the base. The top sports a brushed-aluminum plate mounted over a plexi-acrylic chamber that features an internal fin structure with micro-channels. The block top hosts a pair of G1/4 threaded ports, which are industry standards for liquid-cooling fitments. The CPU-block mounting plates are powder-coated steel, but the metal mixture is no worry here, as the steel components never make contact with the coolant stream.

The pump is the heart of any liquid-cooling loop, and EK has chosen its PWM-capable EK-ACR SPC-60 pump-and-reservoir combo unit for the Fluid Gaming A120. The pump and reservoir are shipped fully assembled, with an EK-logo anti-cyclonic baffle centered above the pump impeller. It's visible in the picture above.

The reservoir is threaded to allow removal from the pump for cleaning and inspection, or simply to allow an upgrade to a different reservoir at a later time. The pump uses threaded rubber feet that you can secure to a 120mm mounting bracket within a case, typically over a fan intake vent on a case's floor. The pump supports PWM, or you can use a PWM-to-SATA power adapter if you wish to allow coolant to flow at full speed at all times.

Given the "A120" in the name of the kit, it stands to reason that the radiator would be an aluminum 120mm variant, which EK calls the "Alustream SE." The radiator has a dense fin structure to maximize thermal exchange, given the otherwise small footprint.

A Vardar 120 fan rated at 1850 RPM provides the necessary airflow over the cooling fins; you can mount it in either a push or a pull orientation. Like in all of our liquid-cooling tests, we mounted the fan to push air through the aluminum radiator and flow out the top vent of our Corsair Graphite 760T case.

The EK Fluid Gaming A120 kit contains everything for cooling your CPU, including tubing, a bottle of EK-brand concentrated coolant (you mix this with distilled water), and power headers, including a 24-pin ATX jumper connection. This handy tool allows you to disconnect your ATX motherboard power and bypasses the power-up for most of your large components, but it still allows the pump and other accessories to operate while filling the cooling loop. Of course, all of these steps, warnings, and tips are included in the setup guide, with detailed diagrams on each page.

With the Fluid Gaming A120 fully installed, filled, and bled of air, the footprint of the entire cooling loop is much more compact than one might expect. The flexible EK tubing was very forgiving, making it simple to route our full loop and secure the tubing snugly with the compression fittings. Adding color to this setup is as simple as opening the reservoir and tipping in the desired dye of your choosing, or filling the loop with an EK-approved coolant pre-tinted in the color you like.

When powered on, the pump moves an impressive volume of coolant and is very quiet when all the air has been bled from the system. The small reservoir did make this a bit more challenging, as it meant small bubbles were continuously pulled into the pump vortex and back through the loop. Several on/off cycles and a gentle rocking of the case allowed larger collections of air to make their way back to the reservoir, where we displaced them with a top-up of distilled water.