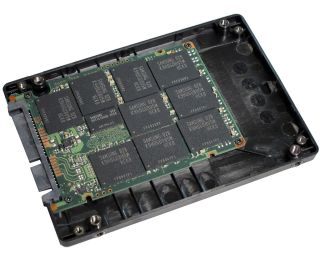 A Dive Into The SSD World

Solid state drives (SSDs) seemingly have it all: storage capacities of up to 512 GB, blazing performance, low power consumption and heat, great efficiency, and incredible physical durability. In everyday life, SSDs seem all but perfect. But there are still some limits and pitfalls. We'll look at the details you need to know about SSD technology as it moves into a variety of applications at home and in businesses.

First, we need to divide the market into segments. One way to approach this is to differentiate between low-cost, mainstream, and high-end offerings. This is typically what you find when searching for SSD reviews or doing price comparisons. Another method distinguishes consumer- from business-class products, roughly translating to client systems versus servers. Since the technology behind those two groups is similar, this article covers both worlds, pointing at individual aspects where necessary.

Business and enterprise products are typically not available in retail stores, as these target larger server and storage companies that assemble larger-scale systems. SSD makers, such as Samsung, Intel, Micron and Toshiba usually provide special support for solution providers. Samsung recently announced a partnership with Seagate to create enterprise-class SSDs. Clearly, the worlds of traditional magnetic and cutting-edge silicon storage are starting to mingle.

While the performance levels and efficiency of SSDs have developed quickly, capacities have not, owing to sluggish increases in NAND bit density. Huge demand from the smartphone sector has dragged on SSD evolution in PC environments. And the awaited transition to 3-bit cell flash memory is happening more slowly than expected. As a consequence, SSDs are getting more affordable, but it doesn’t seem like they'll escalate the capacity battle against hard drives any time soon.

Therefore, SSDs are expected to remain a minority player in the storage market compared to conventional hard drives. But 2010 marks the year in which SSDs achieved critical mass. Prices for entry-level products have come down to less than $99. On the enterprise side, power consumption should be considered. A 2008 study by McKinsey & Company found that data centers consume 0.5% of the world’s energy, causing more CO2 emissions than all of Argentina. The EPA estimates that data center energy consumption will reach 3% in the U.S. by 2011, making SSDs almost essential for keeping energy draw in check.

While enterprise and client SSD specifications don’t differ much, choosing the right drive or the right environment is very important. We will now look at how SSDs work, what they can do for you, where you should be careful when preparing for deployment, how your business will be impacted, and how to make proper buying decisions.

Current page: A Dive Into The SSD World