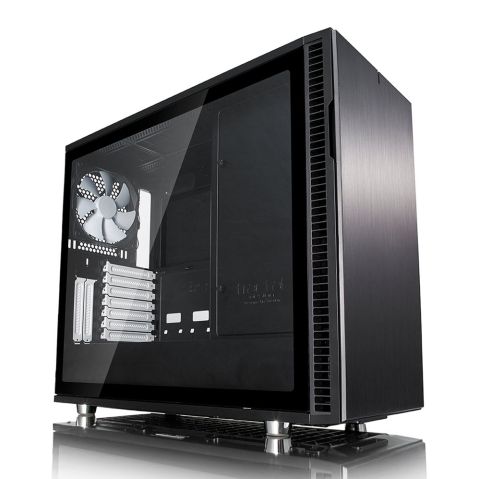 We found the accessories for the Fractal Design Define R6 in a small white box secured in one of the open 3.5" hard drive bays. Inside the box were various screws and zip ties. A ziplock bag containing the user manual is stored under the PSU tunnel.

The Define R6 features a dual layout design that, while configured in the "standard" layout, can accommodate up to six 3.5" hard drives and a pair of 2.5" drives simultaneously. The alternate "open" layout allows you to remove the hard drive mounting locations in the main compartment in favor of a clear air flow path and room for larger GPUs and water cooling components.

The main compartment is equipped with seven expansion slots and can accommodate graphics cards up to 440mm in 3-Way SLI and CrossFire configurations (as long as your third card mounts in the sixth slot, which most boards don't support, or your cards are single slot, which most aren't, or you purchase a flexible riser cable to deploy the side slots and the additional card isn't blocked the PCIe power cables of the other two cards, or...-ed). The chassis also features two expansion slots for vertically mounting a dual-slot GPU, though no PCI-e riser cable is included. There are four cable pass-through holes with rubber grommets in the motherboard tray for cable management (2 x 5", 2 x 3") and a large rubber-lined hole in the top of the power supply shroud (2 x 5"). Additionally, there is a small hole with rolled metal edges in the top of the PSU tunnel for routing audio cables and such. There is also a large hole in the motherboard mounting plate behind the CPU socket area to facilitate heatsink changes without removing the motherboard. This chassis can be outfitted with CPU coolers up to 160mm, graphics cards up to  440mm without removing the front fan, and power supplies up to 300mm in length.

In addition to the six removable hard drive mounting locations that can accommodate both 3.5" and 2.5" hard drives, there are two dedicated 2.5" SSD brackets behind the motherboard tray. The Define R6 has a single 5.25" drive bay slot for those of you still using optical drives or 5.25" drive bay accessories.

The Fractal Design Define R6 is equipped with pair of Dynamic X2 GP-14 140mm intake fans in the front of the chassis and a single 140mm exhaust fan in the rear, over the CPU socket area. The rear exhaust fan location supports both 120mm and 140mm fans as do the mounting locations in the base of the case. In total, the Define R6 supports up to nine 120mm or seven 140mm fans. Specifically, the mounting locations in the top and front of the case can accommodate up to three 120mm or two 140mm fans.