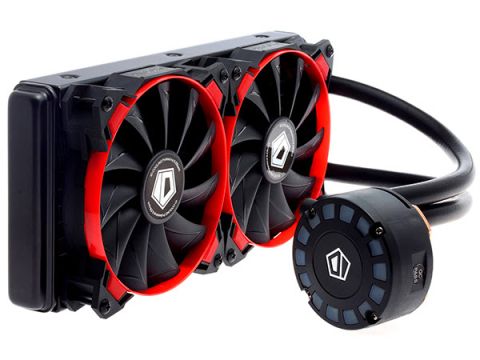 ID-Cooling's Frostflow 240L delivers better performance and superior value among closed-loop coolers of its size. While the expense of added components prevents liquid-cooling from reaching the price-to-performance highs of Big Air, the Frostflow 240L gets us close to that mark without putting a bunch of weight on the CPU socket.

Closed-loop coolers offer the low temperatures of Big Air coolers, without the big heat sink blocking access to components or the extra weight flexing the motherboard. That last "Big Air problem" routinely damages machines in shipping, and is the reason I try to put closed-loop coolers in the machines I build for others. On the other hand, the higher price of closed-loop coolers is rarely offset by increased performance, which is the reason I often fail to incorporate these into my System Builder Marathon machines. I'm always looking for the best performance-per-price, and ID-Cooling is trying to help by selling its two-by-120mm cooler direct to the public for less than $100.

Two sets of mounting brackets allow the Frostflow 240L to fit both square ILM Intel platforms (LGA 775 through 2011-v3) and AMD motherboards with four-bolt brackets. AMD users are required to remove the motherboard's original "clip" bracket, and everyone except LGA 2011 users must then install the universal support plate to the back of their motherboards using the included screws and standoffs.

ID-Cooling doesn't polish the base of its Frostflow 240L, but instead leaves a very flat machined finish, which is almost perfect for keeping thermal paste in place without requiring too much of it.

Installation begins by securing either the Intel or AMD brackets, which are added to the water block/pump base with a single screw on each side.

Since LGA 2011 has its own threaded mounting plate, the Frostflow 240L includes a special set of standoffs with those threads. Unlike its generic standoffs, which accept screws on both sides, the LGA 2011 standoffs use nuts.

Using a two-fan splitter cable in the installation pack, the Frostflow 240L requires only two motherboard fan headers to power its single pump and twin fans. Fan control is the responsibility of the motherboard, which really means that the Frostflow 240L doesn't require any cumbersome software or its own firmware.

A ring of LEDs slowly circle the pump body as the Frostflow 240L does its cooling duties.