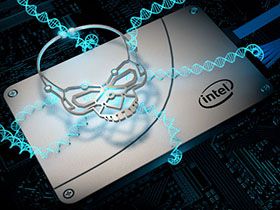 Intel's old school X25-M SSDs leveraged the company's 50 nm flash and a controller designed in-house. That once-bleeding-edge SATA 3Gb/s-capable processor could be equipped with up to 10 channels of memory, which helped bolster its performance and potential capacity. Although the silicon went on to be revised for other applications, we as enthusiasts held a soft spot in our hearts for it, even as faster and less expensive competition rose to challenge Intel.

Initially, the advent of SATA 6Gb/s saw Intel left behind, though a tryst with Marvell's 9175 controller, followed by a SandForce partnership, at least kept the company visible.

Then, a little over a year ago, another proprietary processor surfaced in the SSD DC S3700 (Intel SSD DC S3700 Review: Benchmarking Consistency). We suspected, however, that we weren't going to see that controller in a mainstream, client-oriented drive. It was purpose-built for the rigors of enterprise deployment, and emphasized different strengths than what you typically find on the desktop. Nevertheless, we asked if the new chip would one day surface in that space, and were told it'd be a question of resources. Since Intel was being serviced by its solid LSI SandForce partnership, we figured it'd be a while.

The time has come, though. We finally have another modern consumer-oriented drive with an Intel controller. Dubbed the SSD 730 Series, it leverages the same platform as the company's SSD DC S3700 and S3500.

We're told that SSD 730 drives will cost somewhere around $1/GB, which means it won't be competing aggressively against some of our favorite alternatives in a value comparison. It should be able to deliver strong performance, though. This is a prosumer product, aimed at professionals who remember Intel's commitment to speed and reliability from the generation prior.

Intel is introducing two capacities, 240 and 480 GB, though there's no reason the company couldn't also cook up a 960 GB model down the road.

Intel makes some very specific tweaks to this implementation, though. As OCZ discovered early on, a hotter controller can affect performance results. Intel took that information to heart and showed off an experimental SSD with parameters that could be user-modified (overclocked, if you will). But somewhere along the line, the company chose not to move forward with a tunable drive aimed at enthusiasts. Instead, turns the knobs for you. The SSD 730's controller runs 50% faster, with a 600 MHz clock rate, rather than 400 MHz. Also, its NAND interface is sped from 83 to 100 MHz. "Factory-overclocked", company reps call this. The marketing there is questionable.

The SSD 730 does include some interesting features to help make up for the emotional letdown. There are no hardware-accelerated encryption capabilities to speak of. Instead, you get better endurance ratings than most client-oriented SSDs can offer, along with power-loss protection courtesy of electrolytic capacitors soldered onto the PCB. Intel positions the SSD 730 as a RAID-ready device, diminishing the utility of on-drive encryption; a proper RAID controller should handle that. The capacitors are more interesting and useful, particularly in multi-drive setups.

Oh, and the SSD 730 gets a boss skull logo on the chassis, just like some of Intel's other enthusiast products. Enough talk. Let's open this thing up.

You'll have to deface the skull sticker to reach a hidden screw. From there, the top pops right off.

The back of the PCB hosts the other eight NAND packages, both DRAM placements, and the Intel PC29AS21CA0 controller running at 600 MHz.