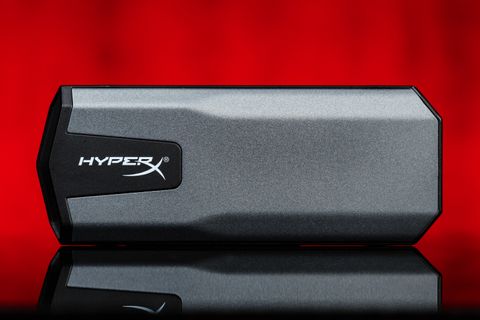 We pitted the HyperX Savage EXO against the high-end Thunderbolt 3 Patriot Evlvr 1TB and 1TB Samsung X5 drives. We also included the 1TB SanDisk Extreme Portable SSD, which is another USB 3.1 Gen 2 product with similar specs, and an older Samsung T1. Finally, we included our USB 3.0 DIY WD Blue 3D SSD and HDD.

The Savage EXO delivered a peak of 547/525 MB/s of sequential read/write throughput. The SanDisk Extreme led slightly during the small-file read and write tests.

CrystalDiskMark (CDM) is a simple and easy to use file benchmarking tool that many storage vendors use to assign specs to their products.

Random performance, on the other hand, wasn't as impressive. The Savage EXO lagged even the much smaller and multiple-generations old Samsung T1. The Thunderbolt 3-based devices also opened up a sizable lead due to their faster interface and protocol.

We use the DiskBench storage benchmarking tool to test file transfer performance with our own custom block of real data. We test external drives with three file transfers that consist of 25GB of photos (10GB of iPhone jpgs and 15GB of RAW photos), 50GB of movies, and 25GB of documents. First, we transfer each folder from a 1TB NVMe SSD to the external device; then we follow up by reading a 3.7GB 7-zip file and a 15GB movie back from the device.

The HyperX Savage EXO showed its true colors during our real-world file transfer tests. While it was faster than the HDD in all three tests, it ranked last among the SSDs by a fairly large margin.

The Savage EXO was actually quite savage during the read tests, though. It surpassed the other USB-based drives, even the SanDisk Extreme, and delivered an average read speed of 475 MB/s in both our read tests.

PCMark 8 is a trace-based benchmark that uses Microsoft Office, Adobe Creative Suite, World of Warcraft, and Battlefield 3 to measure the performance of storage devices in real-world scenarios

HyperX’s Savage EXO outstripped both of the DIY WD Blue externals but trailed the SanDisk Extreme and older Samsung T1. It should go without saying that Thunderbolt devices are still in a league of their own compared to USB.

Write speed and temperature are two important and inter-related metrics for external devices. We threw in one last test to measure the performance of the Patriot Evlvr over the course of 15 minutes of writing to the full span of the drive. We logged the temperature of the drive via the S.M.A.R.T. data to see when (or if) thermal throttling kicks in and how it impacts performance. This test also reveals if the drive has an SLC cache, which is a small portion of fast flash that absorbs incoming write workloads. Bear in mind that results will vary based on the workload and ambient air temperature.

The Savage EXO comes with a stingy ~3GB performance-boosting SLC write cache. Sequential write performance plummets from over 500MB/s to just 166MB/s after the workload saturates the tiny cache.

The temperature reading remained rather static for most of this test. That's because the Savage EXO's SMART data doesn’t actively update when the drive is being read or written to–instead it only updates periodically. That means our measurements aren't as granular as we would like.

The EXO's temperature jumped to 50C around the 200-second mark, where it remained for the rest of the test. After the write workload finished, our SMART data logger captured a maximum temperature of 54C. The drive cooled off quickly thereafter, so we don't think extended write workloads will trigger thermal throttling.

Prev Page But Is It Really Savage? Next Page Conclusion
1 Comment Comment from the forums
Be In the Know