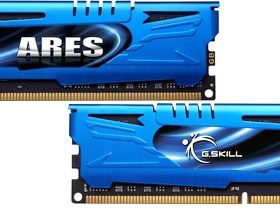 Intel's CPUs have the high-end gaming crown right now. However, with the introduction of its Trinity architecture, AMD reasserted itself in the mainstream space. Not only did the company prove its worth in our assessment of performance-per-dollar, but it also came out on top in the raw integrated graphics benchmarks, delivering playable frame rates in more titles than Intel's best Ivy Bridge-based effort.

Slow memory is perhaps the biggest inhibitor of integrated graphics performance, since built-in GPUs generally rely on shared system RAM to do their job. Discrete graphics processors have their own dedicated pools of memory, often composed of the latest technologies attached to very wide interfaces, enabling hundreds of gigabytes per second of throughput.

We're thrilled, then, that the Trinity design's memory controller supports data rates up to DDR3-2400. Although 19.2 GB/s per channel is quite a ways off from the 288 GB/s you get from a Radeon HD 7970 GHz Edition's 3 GB of GDDR5, every little bit of bandwidth helps, particularly in games. And that's what we'll be testing today.

As we were planning this piece, G.Skill offered to send its newest high-end memory kit. Rather than spring for one of the most expensive dual-channel combos available, though, we asked the company to ship over something that an A10-5800K-buyer might actually match up to a value-oriented platform.

According to SiSoftware's Sandra, there really isn't much reason to run at DDR3-2400, given relatively loose timings. But we’re counting on real-world game tests to give us more definitive results.