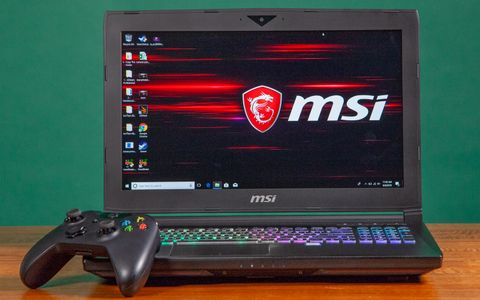 The MSI GT63 Titan is a powerful gaming machine with a comfortable keyboard, but it could use a new design and a better touchpad.

Sure, laptops are portable, but when it comes to gaming, bigger can be better. MSI’s GT63 Titan ($2,199 to start; $2,999 as tested) forgoes thinness for a powerful Nvidia GeForce GTX 1080 paired with an Intel Core i7-8750H and 32GB of RAM with SODIMM slots to spare. That makes for a powerful machine, though it uses MSI’s most tired design and has a fussy touchpad when it comes to Windows 10 gestures.

Love it or hate it, MSI has stuck with its usual design for the Titan. It has a black, aluminum lid with a brushed pattern. MSI’s logo is silver above a red dragon shield, which is flanked by two black and red stripes.

Lifting the lid reveals the 15.6-inch, 1920 x 1080 display, surrounded by a very thick bezel that I wish MSI would have cut down. The metal deck features the same brushed pattern as the lid and has an RGB chiclet-style keyboard.

There are ports on three sides of the laptop. On the left are a Kensington lock slot, a USB 2.0 port and four audio jacks: line in, line out, headphones and microphone. The right side is home to an SDXC memory card reader and a trio of USB 3.1 Type-A ports. On the back are an Ethernet jack, USB Type-C port, HDMI, Mini DisplayPort and the power jack.

The Nvidia GeForce GTX 1080 (8GB) in the Titan is enough for some pretty intense gaming. I played Middle-earth: Shadow of War on Ultra settings at 1080p, and performance varied wildly, usually hovering around 50 frames per second (fps) but dropping as low as 28 fps. When I bumped down to Very High settings, it ran at a steady 99 to 100 fps.

On the Rise of the Tomb Raider benchmark (1920 x 1080, Very High settings), the machine played at 68 fps. That’s higher than the premium gaming average (63 fps), though the Razer Blade proved faster.

But on the GTA V benchmark (1920 x 1080, Very High settings), the Titan bested all of the competition, as well as the category average.

The Titan underperformed on Metro: Last Light, running at 52 fps, which is below the average (64 fps), only beating the Predator (45 fps).

I stress-tested the Titan by running the Metro: Last Light benchmark 10 times (approximating roughly half an hour of gaming). The laptop played the game at an average of 76.9 fps across the runs. It stayed in the high 70s and 80s across most runs, though for a few runs toward the end, it dropped to the low 70s before rebounding for the last two runs. The CPU ran at an average of 3.1GHz and an average temperature of 89 degrees Celsius (192 degrees Fahrenheit). The GPU measured an average 83 degrees Celsius (181 degrees Fahrenheit).

With an Intel Core i7-8750H series processor, 32GB of RAM and a 512GB PCIe-NVMe SSD, simple workloads are no match for the Titan. With 30 tabs open, including one streaming a YouTube video, I noticed no performance issues. To truly tax it, you need to be doing serious creative work or gaming.

The 15.6-inch, 1920 x 1080, G-Sync display produces vivid colors, though I wish I could turn the brightness up a notch or two. When I watched a trailer for Shazam!, Billy Batson’s red hoodie popped against the gray walls in the office of an orphanage, but some other details were in a bit too much shadow.

However, in outdoor scenes, like when the hero tries (and fails) to fly off of a halfpipe, everything was perfectly bright. When I played Middle-earth: Shadow of War, the dark screen made it tough to see in an orc cave, but I could still make out Talon's red shirt among his brown and gray cape.

The Titan’s screen covers an excellent 161 percent of the sRGB color gamut, handily surpassing the premium gaming average (132 percent) and both the EVO15-S and the Triton 700.

MSI’s display measured an average of 274 nits of brightness. That falls just short of the 278-nit premium gaming average and the Razer Blade Pro, but is more luminous than the EVO15-S and Triton 700.

The Titan’s RGB keyboard offers 1.3 millimeters of travel, which is less than we like to see on a gaming laptop (at least 1.5 millimeters, please!), but, perhaps because of the 70 grams of required actuation force, it feels clicky and comfortable. On the 10fastfingers.com, I hit 115 words per minute, which is on the high end for me, though with an ever-so-slightly increased error rate of three percent.

The 4.1 x 2.3-inch touchpad is a bit too plasticky for my taste, but it’s good enough for browsing the web and other simple tasks. It doesn't use Windows precision drivers (MSI opted for Synaptics), and while Windows gestures, like tapping three fingers to summon Cortana or swiping three fingers up to show all of my open windows, did work, they sometimes required a few frustrating tries.

The speakers on the Titan are comfortably loud, easily filling a small conference room as I jammed out to The Darkness’ “I Believe In a Thing Called Love.” The guitars, drums and vocals were all clear and distinctive, and while the bass wasn’t strong, I could still make it out. My music experience improved after I went into the Nahimic software and turned on surround sound, though I didn’t find the other features useful for music.

When I played Middle-earth: Shadow of War, the music was a bit quiet, but orcs grunting and breathing as they chased Talion and the clashing of weapons produced sharp, clear sounds.

To get the bottom cover off, you need to remove six screws (one placed under a factory seal sticker). These are all Phillips head screws. My only challenge was one fairly deep screw, for which I needed a longer screwdriver.

Most of the inside is taken up by the heat pipes and MXM module. The PCIe-NVME SSD can be replaced by removing a single screw, but the HDD requires a few more because it’s attached to a bracket. There are two open RAM slots. While ours came with 32GB of RAM already, it’s good to know that it’s easy to get a stick in there when you want to upgrade.

The Titan doesn't last very long on a charge. On our battery test, which continuously browses the web over Wi-Fi, streams videos and runs graphics tests at 150 nits of brightness, it ran for just 2 hours and 48 minutes. While most gaming laptops don't last very long, this is still less than the 3:32 premium gaming average.

Under a simple productivity workload, the Titan can stay cool. After streaming 15 minutes of HD video from YouTube, it measured 97 degrees Fahrenheit on the bottom, 93.5 degrees between the G and H keys and 90 degrees on the touchpad.

The FHD webcam on the Titan is workable. In a shot I took of myself at my desk, I appeared to be in a bit of  shadow, but I could still make out details in my skin and see the color-accurate red stripes on my shirt.

As with most of MSI’s gaming machines, the most useful piece of preinstalled software is Dragon Center, which lets you tune your system’s performance and fan speeds, see CPU, GPU, memory and storage usage and activate Gaming Mode to optimize applicable games for the system, including Dota 2, Overwatch, Counter-Strike: Global Offensive and Rocket League. MSI’s True Color software lets you change the screen temperature, which could be good for some late-night gaming.

There is quite a bit of bloatware on the Titan, though. This includes Music Maker Jam, Microsoft’s versions of Minesweeper, Mahjong, a jigsaw puzzle, as well as a series of word games, plus LinkedIn, Evernote, PowerDirector 4 (for video editing) and PhotoDirector 8. There’s also the standard junk from every Windows 10 build, like two different versions of Candy Crush, Disney Magic Kingdoms and Royal Revolt 2: Tower Defense.

MSI sells the GT63 Titan with a one-year warranty.

There are varying models in between, including one for $2,799 with a 4K display and GTX 1080 but the same memory and storage options from the cheapest model.

The MSI GT63 Titan is a high-performance gaming laptop with a comfy keyboard and easily upgradable parts. The red and black design is getting old, though, and I wish the display was slightly brighter. I would also like a Windows precision touchpad for productivity use, though if you’re one of the many gamers who brings a mouse along with their keyboard, you may not mind as much as I do.

If you want something thinner, the Origin EVO15-S is a bit cheaper when similarly configured (but with a GTX 1070 Max-Q, the only graphics option available), at $2,632. Its display, however, is no brighter than the Titan's. The Razer Blade Pro has a better (and larger, if that’s your bag) screen and a more attractive design, but it uses a 7th generation Intel Core processor. And if you want a GTX 1080, like the Titan has, it starts at $3799.99, which is far more expensive.

But if you’re good with the size and don’t need the brightest monitor around, the Titan makes a solid price and performance play.