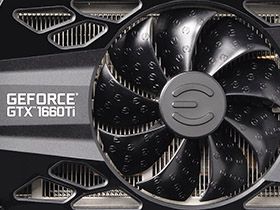 The software is set up to log the power consumption of graphics cards, storage devices, and CPUs. However, we’re only using the bricklets relevant to graphics card testing. EVGA's GeForce GTX 1660 Ti XC Black Gaming gets all of its power from the PCIe slot and one eight-pin PCIe connector.

Sub-10W power consumption is a big improvement compared to Nvidia’s higher-end Turing-based cards that idled closer to 20W at launch.

Three runs of the Metro: Last Light benchmark give us consistent, repeatable results, making it easier to compare the power consumption of graphics cards.

An average of 124W is slightly higher than Nvidia’s specification. At least the 131W peak we recorded is not egregious.

EVGA uses the PCI Express x16 slot sparingly, instead leaning on the eight-pin auxiliary connector. No wonder this card eschewed the six-pin connector found on many GeForce GTX 1060s.

Charting power consumption across our three-run benchmark shows the narrow range we’re working with. For the most part, GeForce GTX 1660 Ti behaves itself, which is more than we can say for certain other mid-range graphics cards.

Current draw over the PCIe slot varies a bit between 2A and 3A. However, the instantaneous dips and spikes are incredibly small. In comparison, GeForce RTX 2060 pulls closer to 5A from its 16-lane slot, demonstrating a much straighter line across our three-loop Metro benchmark.

There’s quite a bit more noise through the eight-pin connector’s line. Average draw on that rail lands just under 8A.

FurMark is a steadier workload, resulting in less variation across our test run. Average power is almost identical, while less room for dramatic swings brings the peak reading down under 128W.

There’s no room for performance to vary in FurMark, so the wavy line chart we saw under Metro: Last Light is gone, replaced by much more consistent power consumption through more than 15 minutes of recording.

GeForce GTX 1660 Ti and 1060 land near each other, yet again. But it’s the GeForce GTX 1070 that EVGA’s XC Black Gaming card more closely resembles in our benchmarks. As you might imagine, the GTX 1660 Ti achieves a better performance/watt ratio.

Prev Page Gaming at 2560 x 1440 Next Page Temperatures, Fan Speeds and Clock Rates
4 Comments Comment from the forums
Be In the Know