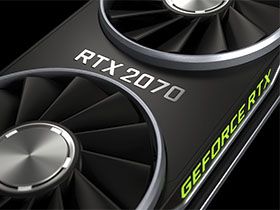 According to GPU-Z and Precision X1, our GeForce RTX 2070 Founders Edition sample spins at around 1500 RPM, even at idle. That sounds unnecessarily aggressive. However, noise isn’t an issue for Nvidia’s thermal solution.

As the card warms up across three loops of the Metro: Last Light benchmark, its fans gradually speed up in response. By the end of our sequence, they remain well below 2000 RPM.

In comparison, GeForce GTX 1080 Founders Edition starts at a much lower fan speed but ramps up faster, leveling off around 2200 RPM. Radeon RX Vega 64 idles just under 700 RPM and then responds almost immediately to load, topping out around 2400 RPM.

The same fan curves apply to our FurMark test, though all three cards are pushed to their target speeds much faster.