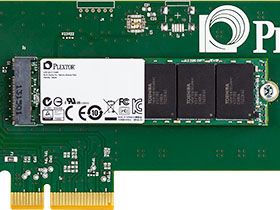 Plextor Gets A Jump on PCIe-Based M.2

We're enthusiasts. Whether we need more speed or not, fast hardware is attractive to us. And we're happy to explain to friends and family that they don't need to replace all of their mechanical disks with solid-state storage, but they should be booting up and launching their favorite applications from an SSD.

Yes, hard drives will continue serving as high-capacity user data repositories for years to come. But the rate at which they evolve is slow. Meanwhile, solid-state technologies push forward rapidly, pushing the limits of interfaces as soon as they're made available. It's not fair to keep SSDs married to SATA and the AHCI protocol. We don't even need traditional form factors. The solid-state nature of these devices makes them flexible and rugged. In the future, storage is going to look unlike anything around today.

The advancements are going to hit incrementally, though. Take the M.2 form factor, for example, which we previously introduced in SanDisk A110 PCIe SSD: Armed With The New M.2 Edge Connector. Here we are, eight months later, and we're just getting our hands on a second M.2-based device, Plextor's new M6e PCI Express SSD (which also goes by the model number PX-AG256M6E in 256 GB trim). Like SanDisk's drive, this is a natively-PCIe device with a PCIe-based controller that continues to rely on AHCI.

One day, it's probable that AHCI will go the way of Iomega's Zip disk. But for now it remains a viable standard for ensuring the interoperability of drives and controllers. It doesn't require proprietary drivers, since Windows, Linux, BSD, and OS X all support the interface. That also means important features like the TRIM command are enabled as well.

And so the M6e is a stepping stone on the way to a more SSD-optimized storage ecosystem. This hybrid configuration keeps progress moving forward without rocking the boat, thanks to its off-the-shelf Marvell 88SS9183 native PCIe controller, along with Plextor's familiarity with developing firmware for Marvell's processors. The M6e is basically a 22 mm-wide, 80 mm-long M.2-compatible SSD on two lanes of PCI Express. Our sample shipped on a half-height PCIe x4 adapter that makes it easy to drop into any PCIe-equipped desktop, even if it isn't M.2-enabled. As the ecosystem supporting M.2 grows, the M6e will eventually become available without the extra card.

What about that SanDisk A110 review we were just talking about? As an OEM-only solution, you're going to have a hard time finding one without a lock pick, crowbar, and threat of jail time. A few specialized vendors might post it for resale, but it doesn't look like the A110 is available today.

Then again, it's not like there's a lot of demand for the M.2 form factor...yet. I'm guessing you'll see a lot more of it once Z97-based motherboards start surfacing in the very near future. And so Plextor is dropping the flag on enthusiast-oriented storage for M.2 ahead of the rush. It'll have competition eventually. But getting out in front with what it hopes is a solid product could earn the company some serious power user credibility.

That adapter card means you don't have to wait to try the M6e, though. It's available today, and it should work on any motherboard capable of second-gen PCIe signaling.

There are three versions of the M6e: one with 128 GB of capacity, a 256 GB model, and a 512 GB flagship. The first two are already on Newegg for $180 and $300, respectively. They'll apparently be available with and without the adapter card, though right now both retail packages include it. Before you grab one and rip off the M.2 module to add to your cutting-edge motherboard, bear in mind that voids your warranty. Just pick the version you need deliberately and you'll be fine.

See that warranty? Five years across the entire family. Plextor and Intel were ahead of the pack offering such lengthy guarantees on drives with sub-3x nm flash. And then there's the pricing, which reflects what you'll pay right now if you buy a drive on Newegg (at least for the smaller two capacities). We can only hope that post-launch pricing drops closer to $1/GB once Newegg no longer sells the drive exclusively.

We know that Plextor is planning a 1 TB SATA-based SSD. However, it won't employ the same Toggle-mode flash. It'll instead utilize Toshiba's new A19 (A for advanced) NAND, probably in 128 Gb densities. The M6e uses more performance-oriented memory from Toshiba, the same 3000 P/E-cycle stuff that rode aboard the M5 Pro. As a result, achieving 1 TB could be tricky on the M6e. As a performance boot drive and application launchpad, however, 128 to 512 GB should be ample.

There isn't any point in taking the M6e apart. It's basically naked right out of the box. But there are a few components that bear closer inspection. Let's start with those.

Current page: Plextor Gets A Jump on PCIe-Based M.2