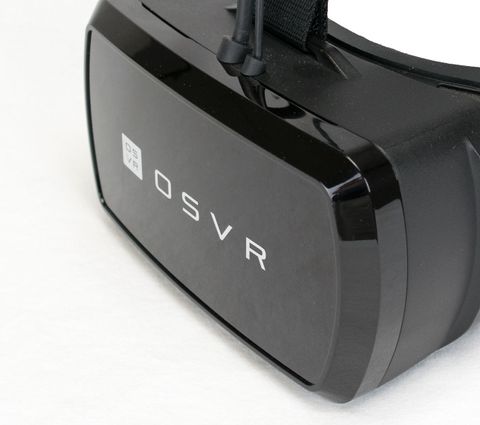 The OSVR HDK is far from perfect. It suffers from some tracking hiccups and the ergonomics could use some refinement, but if you wan't to get an early start in the world of VR and can't afford the graphics cards needed for that experience, the OSVR HDK 1.4 will likely allow you get into VR without the GPU upgrade.

Consumer virtual reality was a pipe dream for a long time, but it's now becoming tangible. Oculus started shipping its first developer kits three years ago, Google launched Cardboard over a year ago and Samsung launched the GearVR with the help of Oculus late in 2015. Those two latter products exposed millions of people to virtual reality.

Mobile VR is the entry point to virtual reality, costing as little as $10. Of course, there are much higher-end products available. The Rift launched in late March with high refresh rate, low-persistence displays, positional tracking and refined, comfortable fit and finish. But Oculus asks $600 for the privilege of owning its platform. HTC’s Vive offers a more advanced package with room-scale tracking and wand controllers, but it commands an even higher $800 price tag. On top of that, both systems require high-end computers to drive them competently.

The price of PC-connected VR hardware is simply out of many enthusiasts' reach. Fortunately, there is a more affordable option available if you aren’t afraid of some tinkering. OSVR (Open Source Virtual Reality) offers a kit through its partner, Razer, which can get you inside of virtual worlds for a lot less money. The OSVR Hacker Developer Kit 1.4 opens the door to anyone who wants to dip their toes into VR, but can’t quite afford the Rift or Vive.

If you don’t have $600 burning a hole in your pocket, but want to see what VR is all about, the OSVR HDK might be worth your attention. Razer sells the OSVR HDK 1.4 for $300. That's a far cry from the Vive or Rift. Its requirements are also much less demanding, so there's a good chance your current PC can deliver an enjoyable experience.

What’s In The OSVR Box

The OSVR Hacker Developer Kit comes packaged in a fairly generic cardboard box aside from the OSVR logo emblazoned across the front and back.

The headset rests inside a thick layer of closed-cell foam to keep it protected during shipping. Its straps wrap around a large piece of foam that contains a device OSVR calls the belt box module. The belt box is similar to HTC's link box, except it clips to your waist rather than sitting on your desk.

The OSVR HDK 1.4 includes an infrared positional tracking kit. The IR faceplate was previously an optional upgrade for the OSVR HDK, but it now comes installed on the HMD, which is tracked by an infrared camera that connects to your computer via USB. It is powered by a cable that piggybacks off of the headset’s power source. The IR tracker is surprisingly small; the entire camera measures approximately 1.5 x 2 inches and is roughly one-third of an inch thick. The bottom of the camera is threaded, and Razer includes a small flexible tripod to screw in so you can place the camera on your desk.

Under the IR tracking kit, you'll fine a 10-foot braided cable that combines USB 3.0 and HDMI connectivity. It also includes a 12V, 2.0A power adapter bundled with five interchangeable plugs, so you should be able to use it in any region. A small lens brush blows air when you squeeze it; that's tucked inside the same box as the power adapter. Meanwhile, a quick-start guide with a handy diagram shows you all of the components in the box, while an information guide steps through plugging the system in.