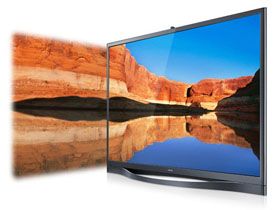 I remember seeing my first flat-screen TV in a Circuit City many years ago. It was a 32-inch plasma panel, and it was selling for $5000. Back then, LCDs were just starting to appear on desktops, but the technology wasn't yet available in large enough screen sizes for the living room. If you wanted a television you could mount on the wall, plasma was it.

As you already know, the tables turned completely. LCDs can be found in sizes up to 80 inches, while prices have dropped tremendously. Where every manufacturer once offered multiple plasma models, now only LG and Samsung continue to market them.

If you visit any A/V forum, you will undoubtedly find threads devoted to debating LCD versus plasma technology. Obviously, LCD won decisively in the marketplace. If plasma penetrated the living room first, how did this turn of fate occur?

For those who have not previously considered a plasma HDTV, let me offer a little primer about how it differs from LCD. Firstly, the only thing the two technologies share in common is that they’re flat panels. After that, the similarity ends.

LCD is a light valve display, which means that light is filtered and polarized by the pixel structure to produce the red, green, and blue primary colors. Plasma, on the other hand, uses pixels that are self-illuminating. The red, green, and blue sub-pixels are like tiny light bulbs. They’re filled with a gas, which, when stimulated by current, cause a phosphor deposit on the inside of the cell to glow. The cell’s brightness is then controlled by varying the voltage.

The principal advantage of this approach is greater contrast. You can’t turn a plasma pixel off completely like a CRT phosphor. But at the minimum voltage, it’s much darker than an LCD pixel. Superior black levels translate to a greater dynamic range. If you agree with us that contrast is the most important component in image quality, then you might consider plasma for your next HDTV purchase.

The main disadvantage is power consumption. A large LCD panel with an LED backlight might draw 100 watts at peak load. Plasmas can draw as much as 500 watts displaying bright content. And an LCD will give you more light output at a given current level. If you have a room with incoming sunlight, a plasma might not muster enough brightness for your application.

Before we move on, I should explain a spec you may have seen in Samsung’s (and other manufacturers') marketing: 600 Hz sub-field drive. Since plasma, like CRT, is not a sample-and-hold technology, there is a dark period between each frame as it is flashed on the screen. This is the reason for plasma’s superior motion processing and lack of blur. The actual amount of time each frame appears is only one or two milliseconds. So, to maintain brightness and prevent flicker, the image is refreshed multiple times per frame. If the sub-field rate is 600 Hz, it means that each frame is refreshed 10 times. Ten refreshes x 60 Hz = 600 Hz.

Next Page Packaging, Physical Layout and Accessories
27 Comments Comment from the forums
Be In the Know