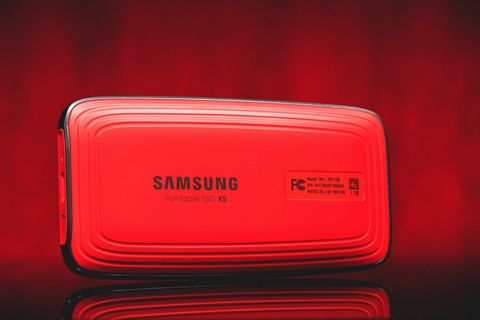 We brought in a diverse range of external storage devices for comparison. The 1TB Patriot EVLVR is a high-performance drive that also wields the Thunderbolt 3 interface paired with the NVMe protocol. This drive is the Samsung X5's closest competitor in our test pool.

We included a couple of the latest external USB 3.1 Gen 2 devices: the 1TB SanDisk Extreme Portable SSD and the 512GB Angelbird SSD2go.

The older USB 3.0 250GB Samsung T1 and 256GB Patriot Supersonic Phoenix highlight the relative performance differences between older and newer interfaces. We also threw in a DIY external drive enclosure from Aukey that connects via USB 3.0 Gen 1. We paired this device with both a WD Blue 3D SSD and an HDD.

The Samsung X5 delivers very fast performance across the board. Here the X5 tops out at 2.5/2 GB/s of read/write throughput. Thunderbolt doesn’t allow for transfer sizes under 4KB in our benchmark, but you can see the new interconnect carries five times more bandwidth than any USB device. The X5 also outperforms the Patriot EVLVR across the entire range of file sizes.

CrystalDiskMark (CDM) is a simple and easy to use file benchmarking tool. The Samsung X5 takes first place in total throughput with sequential speeds of 2,810/2,245 MB/s read/write at a queue depth (QD) of thirty-two, which is representative of performance under an extreme load.

We tested sequential performance at QD1, which is more representative of what you would encounter during a real-world file transfer, and the X5 delivered ~1.5/1.2 GB/s of read/write throughput. The drive proved to be pretty agile, too. The X5's 4K random performance led the pool once again, though the Patriot EVLVR is very competitive during small file transfers.

DiskBench is a storage benchmarking tool that allows us to test the transfer or copy performance of a storage device with real data. We test external drives with three file transfers that consist of 25GB of photos, 50GB of movies, and 25GB of documents. First, we transfer each folder from a 1TB Plextor M9Pe to the external device; then we follow up by reading a 3.7GB 7-zip file and a 15GB movie back from the device.

The Samsung X5 performed extremely well in our real-world movie and document file transfers, but the Patriot EVLVR managed to eke out a slight win during our photo transfer test. Overall, the Samsung X5 delivered roughly three times the performance of the USB 3.1 Gen 2-based SanDisk Extreme Portable SSD.

The X5 read both test files at over 1.8GB/s, meaning it was four times faster than the USB-based comparison drives.

Write speed and temperature are two important and inter-related metrics for external devices. We threw in one last test to measure the performance of the Samsung X5 over the course of 15 minutes of writing to the full span of the drive. We logged the temperature of the drive via the S.M.A.R.T. data to see when (or if) thermal throttling kicks in and how it impacts performance. This test also reveals if the drive has an SLC cache, which is a small portion of fast flash that absorbs incoming write workloads.

Bear in mind that results will vary based on the workload and ambient air temperature. We have charted readings from the Samsung X5's two internal temperature sensors. These sensors measure case and controller temperatures.

The Samsung X5 maintained a write speed of 1.75 GB/s for 25 seconds. That means the drive absorbed 43GB of data before the workload spilled outside of the SLC cache. Native TLC performance stabilized at 1.25 GB/s before throttling kicked in.