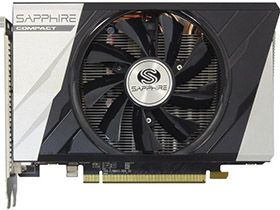 Sapphire’s ITX Compact R9 380 is a tiny card. As you can tell from the name, it's designed to drop into mini-ITX motherboards, and as such takes up a very small footprint. The whole thing, with the full length of the shroud accounted for, barely extends past the PCI Express slot. The exact dimensions are 171mm long, 116mm tall and 32mm wide, easily fitting within the bounds of two expansion slots. The irony, of course, is that mini-ITX-based platforms typically include just one slot along the bottom edge. So, a two-slot card like this one is going to hang over.

Sapphire didn't really spend a lot of time dressing up the 380's aesthetics. There’s nothing inherently wrong with its looks, but the grey/silver with dark grey contrast isn’t exactly eye-catching, particularly for a company known for adding color to its products.

Due to its size, the ITX Compact R9 380 only includes a single 85mm dual ball bearing fan. It's situated directly in the center of the card, and blows air across the fins of the heat sink. Unlike many of the graphics cards we've reviewed recently, this one does not incorporate a semi-passive mode, though it does slow down to 20% duty cycle when more aggressive cooling isn't needed.

Sapphire crams four rather large copper heat pipes into R9 380 ITX's cooler. Coming out of the contact surface is a pair of 8mm pipes, flanked by two 6mm ones. The quartet starts at the bottom and passes vertically through the aluminum heat sink fins. At the top, they spread in both directions and wrap back down through the fins on the outer edges.

Sapphire utilizes the same high-polymer aluminum 16K-hour capacitors found on the R9 390 Nitro that we recently reviewed. It also employs its black diamond choke, which it claims operates 10% cooler and 25% more efficiently than a normal choke.

Unlike many full-length cards, Sapphire’s ITX Compact R9 380 does not have a top-mounted power connector. Instead you’ll find the eight-pin connector at the back of the card. This shouldn’t be an issue, but it’s possible that the plug's position may get in the way. Then again, it's difficult to anticipate where a mini-ITX build is going to run out of room.

Along the top edge of the card you'll find a toggle button used for switching between firmwares. Sapphire includes a legacy BIOS as well as a modern UEFI. The button lights up to indicate the mode it's in. When the light is on, the legacy BIOS is active. The UEFI is digitally signed by Microsoft to support secure boot on Windows 8.1 and 10, and should speed up boot times when it's enabled. Sapphire defaults to the legacy BIOS for compatibility reasons.

The video outputs on this card are not exactly typical. Sapphire opts for the same layout as its Radeon R9 285 ITX from last year. You get a single DVI-D port, one HDMI output and two mini-DisplayPort connectors.

Sapphire thankfully includes an adapter to convert one of those mini-DP ports to a full-size interface, so you won't have to buy a special cable to attach your 4K display. A DVI to VGA adapter is also bundled in the box.

Along with those adapters, Sapphire includes a dual six-pin-to-single-eight-pin PCIe cable in case your power supply doesn’t have the requisite leads. There's also a driver installation DVD, a product registration guide and a quick-start booklet.