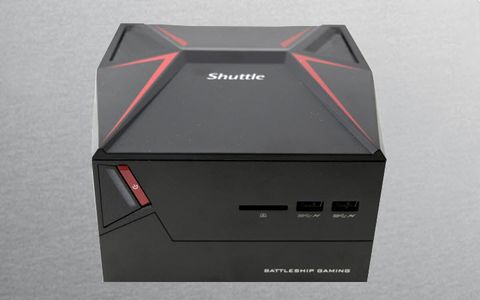 One of the smallest VR-ready mini PCs we’ve tested, the X1 is a viable choice for the money if you like the tiny footprint and generous connectivity options, and don’t mind the modest storage capacity and upgrade limitations of an MXM video card.

Shuttle is known for its small form factor (SFF) barebones gaming PCs, so we were surprised to receive a fully configured mini PC with an Intel Core i7 processor and a Nvidia GeForce GTX 1060 graphics card. The Shuttle X1 is one of the smallest systems (barebones or configured) we’ve seen with true gaming chops. But can this minuscule machine make good on its promise of VR-ready gaming performance? It’s time to put the X1 to the test.

The Shuttle X1 features a box-like chassis (5.6 x 5.6 x 3.4”) with a steel frame and a plastic top panel. The lid sports the company logo and sharp red accents. The design is typical for a PC marketed as a gaming device, except it’s considerably small. The size makes it an ideal pairing for a living-room TV or sitting on a small desk with a monitor.

The bottom and side panels sport vents to dissipate the heat, with the bottom vent acting as an intake with fan behind it. Copper heat sinks are visible through the vented side panels. (We’ll see what those are for later.)

The front panel I/O consists of the power button, an SD card reader, and two USB 3.0 ports. The backside of the X1 is more generous with its USB connectivity, with a USB 3.1 (Gen 1) Type-C, two USB 3.0, and four USB 2.0 ports. You can connect your monitor (or multiple displays) with a DisplayPort 1.3 interface and three HDMI 2.0 ports. An RJ-45 port (powered by a Realtek RTL8111G gigabit Ethernet NIC) will connect you to the internet, but the X1’s integrated 802.11ac Wi-Fi antenna is nowhere to be found. (There’s a good reason for this, so read on.)

The chambered interior makes accessing the primary components (CPU, GPU) difficult for the end user. The bottom panel sports four screws (one at each corner) that will free the metal base from the rest of the chassis to reveal the aforementioned intake fan and copper heatsink. They cool the GeForce GTX 1060 3GB MXM graphics card with two copper pipes and a small heatsink that exhausts the hot air out of the side panel.

A small circuit board with the bottom half of the rear panel I/O is also visible in the chamber, with two of the HDMI ports and the DisplayPort interface exposed. The Intel Core i7-7700HQ processor and HM175 chipset reside in the center chamber (between the top and the bottom) of the device, and end users aren’t meant to toil with it, or the bottom half of the machine.

The top panel can be detached to access the memory and storage by removing the four screws along the top edges of the side panels. To get to the screws, you first have to remove a magnetic sticker that hides them, which may require a small screwdriver to pick it off. Once the screws are out, the top panel lifts out, but it won’t go far. That's because the entire panel is an 802.11ac Wi-Fi antenna, attached to the Intel Wireless AC 3165 M.2 module with thin wires. You should take extra care when opening this panel so you don’t accidentally pull out the cables.

Another metal panel blocks access to the storage and memory, but removing the four screws (near each corner of the device) will set it free from the chassis. However, the metal panel also acts as a drive cage should you want to add a 2.5” storage drive to the system (which we would highly recommend). Any such additional storage was not included in this particular test model. We added our own HDD to get our game library loaded for testing, but we weren’t fond of the procedure, which involved a SATA connector with a tiny cable, and an even smaller retention clip to insert the cable into, requiring many attempts. (Thanks, giant hands.)

Once you are inside, the memory and primary SSD storage are easy to find. The 16GB (2 x 8GB) kit of DDR4-2400 is plenty of memory for a serious gamer. Although the 2,400MHz speed is standard for the CPU, the CAS latency (17-17-17-39) is less common than the usual CAS 16 kits found in many OEM systems. However, the off-brand memory (Goldkey, to be precise) should be adequate for gaming and light productivity workloads. A 256GB SATA 6GB/s Phison PS3111-S11 SSD is seated in the M.2 slot, and the mid-size capacity is ideal for a boot drive with a few light games on it.

The Shuttle X1 comes with Windows 10 Home 64-bit installed, with no bloatware or trial software to speak of cluttering up your low-capacity SSD. However, Shuttle includes a driver DVD in case you want to start over with your system by switching to a bigger SSD or an Intel Optane setup (say, with an Optane M.2 module and high-capacity 2.5” HDD). The external 180W AC adapter is adequate for the mobile components inside the X1.

Next Page Synthetic & Productivity Benchmarks
8 Comments Comment from the forums