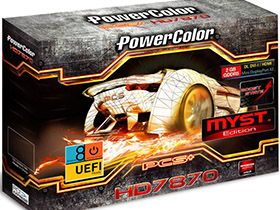 Is Tahiti LE A Cheap Ticket To 3D-Accelerated Paradise?

One man's trash is another man's treasure, right? This proverb isn’t new, so it shouldn’t come as any surprise that not all of AMD's Tahiti GPUs are fully-functional and can be turned into Radeon HD 7970s. In fact, some don't even have the working bits to become stripped-down Radeon HD 7950s. But that doesn't make those chips worthless.

The blocks of functional logic on those handicapped graphics processors should work just as well as those in AMD's better-manufactured GPUs. And that's why we're starting to see companies like TUL Corporation using Tahiti LE parts to create special versions of the Radeon HD 7870. Three companies are selling the TUL-based boards: PowerColor (owned by TUL), VTX3D (also owned by TUL), and Club 3D. Today, we’re going hands-on with the PowerColor card.

The question that begs to be answered is: What exactly is the difference between one of these special Radeon HD 7870s and a true Radeon HD 7950? To begin, let's look at a block diagram of the Tahiti LE graphics processor.

One-quarter of the Graphics Core Next (GCN) clusters are disabled, taking the chip's 2,048 ALUs and cutting that number down to 1,536 active shader units. Each GCN compute unit has four texture units tied to it. So, when eight of the GPU's 32 CUs get switched off, so too do 32 of its texture units. A Tahiti LE consequentially exposes 96, rather than 128 texture units.

The GPU's back-end is independent of the shader cores, so AMD chooses to leave all eight ROP clusters turned on, fielding up to 32 full-color raster operations per clock cycle. It cuts back, however, on Tahiti LE's peak memory bandwidth by bypassing two of six 64-bit controllers. Instead of the 384-bit aggregate interface you get from a Radeon HD 7950 or 7970, these boards make due with 256-bit connections. Narrowing the memory bus has a second effect: cutting capacity from 3 GB to 2 GB of on-board GDDR5. To help compensate, PowerColor increases the memory clock rate from 1,250 MHz to 1,500 MHz, pushing peak bandwidth all the way to a respectable 192 GB/s.

A 925 MHz base core frequency isn't bad either, compared to a Radeon HD 7950's 800 MHz. AMD's Boost feature keeps the new chip running at 975 MHz more often than not, though.

Naturally, a comparison between this card and the original Radeon HD 7950 is going to be interesting. Have a look at their respective specifications, along with some of the other boards competing for space in your mid-range to high-end gaming PC.

Next Page Packaging, Features, And Pictures
Topics
AMD
Components
Graphics
PowerColor
60 Comments Comment from the forums
Be In the Know