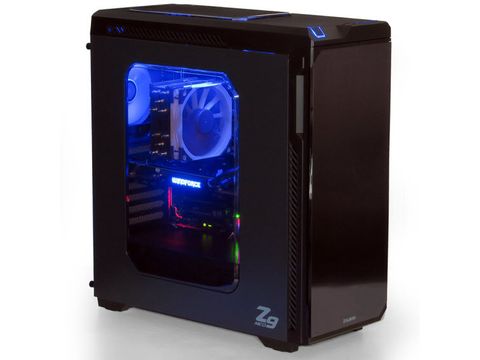 Companies like Zalman know that mainstream computing and mainstream PC gaming are completely different markets: While the typical mainstream PC might get by with a $40-$60 case or some deluxe (quieter) version thereof, gaming hardware puts more heat into the case, which a gaming-market case must then expel. The result is that gamers have the privilege of paying twice as much for hardware, typically $80-$120. Zalman’s response with the Z9 Neo seems to be “We can beat that.”

Most of us know that Zalman isn’t the first company to try beating the market on both quality and price; Antec did this long ago with the sturdy materials of the 300 Illusion, and Cooler Master more recently with the EATX capability of its MasterBox 5. Of course Cooler Master basically gutted the front end of its MasterBox 5 to make room for EATX motherboards, and Zalman could have just as easily listed EATX capability by simply not including its top two removable bays. And even though the Z9 Neo doesn’t have the extra standoffs to hold a 13" board, it just as easily holds the targeted 10.65”-deep enthusiast-class motherboards that drive the mislabeled EATX gaming case market.

And we shouldn’t bury the lede: all three of the cases I just mentioned reached their glory by capitalizing on a $70 web price.

Several of our readers have dumped on USB 2.0 ports, but the Z9 Neo offers those in addition to USB 3.0 ports. We’d rather have the extra ports than not, even if they’re covered with easily-lost rubber dust plugs.

Stand out features include a rubber-backed, aluminum-skinned drive door. Anyone who despises external bays need not open that door, while those of us with bay devices such as the Asus OC Panel can gain easy access.

Front fan filtration is a little more difficult to remove, requiring the user to pull off the Z9 Neo’s face panel and slip the edges of the filter mesh out from under holding tabs. Two 120mm fans are also found here, though these lack the LEDs found on the top fans.

Building With The Z9 Neo

Zalman provides just enough space behind the Z9 Neo’s motherboard tray to slide through the main ATX power cable, and not much room for other cables to cross it. Most builders will be fine as long as they plan their wire routing with that limitation in mind.

The lower portion of the Z9 Neo includes both a power supply cover and a two-tray drive cage, and both of these are riveted in place.

Liquid cooling fans will probably like that the Z9 Neo has clearance for 1.3”-thick radiators both behind the front fans and below the top fans. The front fan mounts further support a pair of 140mm fans, while the top mount is limited to a pair of 120mm parts.

The Z9 Neo installation manual was wrapped around its hardware pack, and I took time to flatten it rather than report that it wouldn’t lay flat. Several thumb screws and cable ties are included in addition to the regular mounting hardware.

Confounding marketers of tool-free features, the Z9 Neo proves that screw-together installation is usually the easiest.