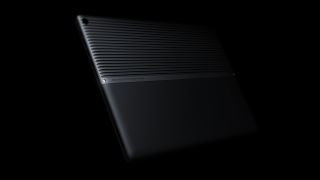 As Eve Devices approaches the launch of its next-gen 2-in-1, the company has released a new teaser image. That picture, published above, is a concept showing a heatsink pattern on the back for passive cooling as well as screws for easier repairability. The company says the device will release in Q4 of this year.

That's just one of five design ideations the company is considering for the 2-in-1, along with the members of its forum. It sounds like the one going by the name "Better Up."

This isn't guaranteed to be the final design. Previously, Tom's Hardware published a different concept design for the Eve V successor that showed four Type-C ports, two of which use Thunderbolt 4. Eve CEO Konstantinos Karatsevidis said that design would use an Intel 11th Gen 15W CPU, Tiger Lake UP4. The company did not say if this design would have different specs, if chosen.

Right now, the company is still polling users on designs, including one with a folio style keyboard and one showing a keyboard with some ports and other components. It is also taking recommendations for names.

According to Eve, this will be the last chance buy the old device before the new one comes in Q4. Eve told Tom's Hardware that this shouldn't affect those who had issues with the previous seller, Fortress Distributors. This will be sold by Eve, and those who were looking for those who had problems, "we will either off them a full refund or [the new system] this year."