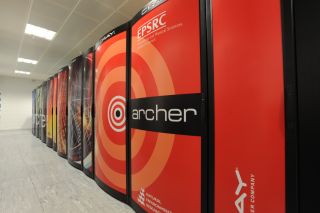 What would you do with 1.5 million threads of computational horsepower? The UK Research and Innovation (UKRI) center has an idea.

The Archer supercomputer system based in Edinburgh was first introduced in 2013 based on the Cray XC30 design and has since been in use by researchers in need of serious compute power. It was once among the top 20 supercomputers in the world, but that’s no longer the case and the time has come to replace it.

As such, the center announced that it has contracted with Cray to build the Archer 2 supercomputer, which will be based on AMD EPYC Rome processors.

The center will build the system out of 5,848 Shasta compute nodes (deep dive here). Each node will contain two second-gen AMD EPYC Rome processors with 64 cores apiece, with each clocked at 2.2GHz (likely the base frequency).

Depending on how it is measured, averaged out over a handful of benchmarks, the new supercomputer will perform an average of 11 times faster than its predecessor.

Full technical specifications as posted on HPC Wire below:

The center will install the Archer 2 supercomputer in the same room as the supercomputer it is replacing, meaning there will be a period of downtime. Archer will be shut down on February 18, 2020, and Archer 2 will be booted up 78 days later on May 6, if all goes according to schedule.

However, after bootup, the system will first go through a one-month stress testing period before the service will be open to researchers. Some researchers might be allowed to access the system during this testing phase, but the UKRI did say that access would be ‘limited.’

The new win builds on an ever-expanding list of EPYC Rome supercomputer wins, including the recent announcement of the exascale-class Frontier supercomputer.